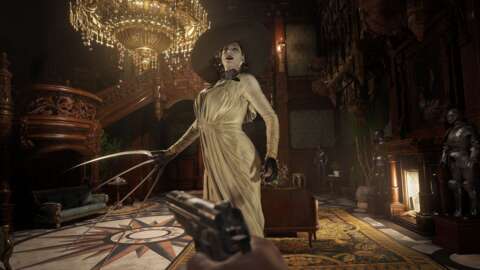 Resident Evil Village is a horror game at heart, and it builds on the return to the classic, slower-moving horror of Resident Evil 7 that was also a signature of the early games. However, Capcom took a slightly different approach to how it handled scares this time around, as it didn’t want to overwhelm the player with terror like it sometimes did in Resident Evil 7. After all, what good is having scares if people quit before they see them?

Speaking to Axios, producer Tsuyoshi Kanda said Capcom received Resident Evil 7 feedback and some players felt it was actually too scary. Scary is obviously the goal in horror, but not if it means players don’t want to keep playing it for fear of an unexpected bowel movement.

“In one regard, that’s exactly what’s we’re striving for, so it’s a huge compliment for us,” he said. “But at the same time, it’s always our goal to create something that anybody can feel comfortable jumping in and playing, so we eased up on the tension curve [in RE Village] relative to Resident Evil 7: Biohazard, so players aren’t in constant fear.”

That constant fear was especially noticeable during the early portions of Resident Evil 7, which often found Ethan Winters chased through a large house by terrifying family members. These moments weren’t always scripted, requiring constant vigilance as players tried to unlock doors and progress the story further. Similar moments appeared in the two recent remake games with Nemesis and Mr. X, who would routinely track you down and force a quick-thinking escape to avoid death.

You can expect more “moments of solace” in Resident Evil Village, Kanda added, similar to the ones you get when encountering a save room and its typewriter. These remain completely safe, though a mistranslated interview regarding Resident Evil 3 last year briefly had players panicking that Nemesis could get you in there, too.