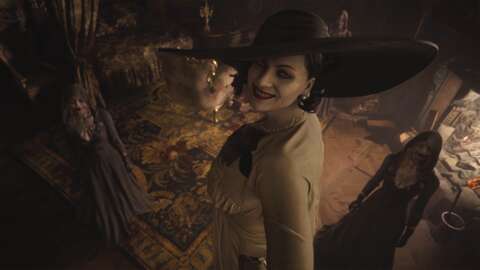 Resident Evil Village will be getting ray tracing support on PC, thanks to a partnership between Capcom and AMD. Footage of Village running with ray tracing enabled was shown off during AMD’s announcement of the RX 6700 XT, its latest RDNA 2-powered GPU for desktops. The footage showed off the now-familiar foyer of Lady Dimitrescu’s mansion, which was illuminated with accurately-traced reflections and lighting.

The partnership between AMD and Capcom also includes FidelityFX support; A suite of AMD-specific enhancements such as variable-rate shading, super resolution support, and more. This does mean that Resident Evil Village is unlikely to get the full suite of Nvidia options on PC, too, which could exclude support for DLSS–a big boon for high framerates when enabling ray tracing.

We’ve partnered with Capcom to utilize raytracing and AMD FidelityFX to enhance the atmosphere and next-generation visuals in Resident Evil Village. We can’t wait to play #REVillage on May 7th. pic.twitter.com/VgSZiPlJvz

Although no announcement was made, this could mean that the Xbox Series X and PS5 versions of Resident Evil Village could also support ray tracing, considering both consoles run off the same RDNA 2 architecture that powers AMD’s latest GPUs. Capcom might make an announcement regarding support before the game launches on May 7.