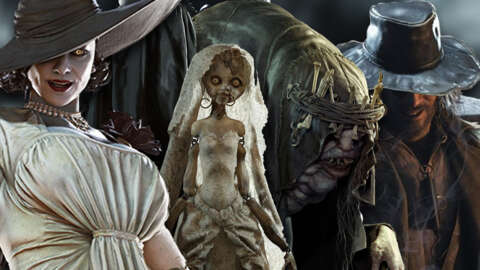 Resident Evil Village has fascinating villains who will attempt to rip Ethan’s face off. Dave explores what we know and the lore behind Alvina Dimitrescu, Donna Beneviento and Angie, Salvatore Moreau, Karl Heisenberg, and of course, Mother Miranda. It’s time for some Resident Evil Village Lore.

Early on in Resident Evil: Village, Ethan is thrown into the wolf’s den, and you get a glimpse of the Lords who await you. I was immediately intrigued by their design and wanted to know more – especially after waking up with a creepy doll in my face. So, here is the lore of Resident Evil: Village’s main villains.

It’s important to start with Miranda and the Cadou, as her tale will help explain the rest of the four lords.

Alcina Dimitrescu was the 181st subject who Miranda experimented on, and as Miranda herself notes, her Cadou Affinity was “Most favorable.”

FFXIV Patch 5.55 And Full PS5 Version Launch May 25, Here Are The Details