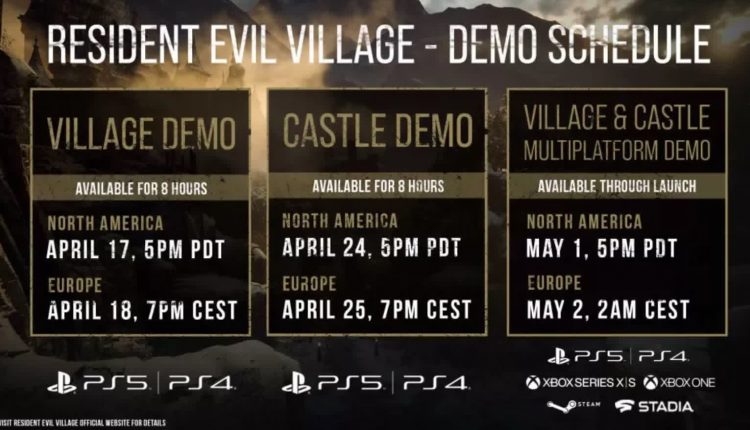 Something to look forward to: The Resident Evil Village showcase took place a few hours ago, and with it came plenty of news about the next installment in the horror franchise. The biggest reveal was that a new Resident Evil Village demo arrives at the start of May, and it’s available for all platforms, including the PC. There’s also a new trailer (above).

Unlike the previous PlayStation-only demo of Village, the one that drops at 5 PM PDT on May 1 (North America), is available on PC, Stadia, Xbox One, Xbox Series X/S, PS4, and PS5. It’s time-limited, so you’ll only have 60 minutes to check out the castle and village areas.

PlayStation 4 and 5 owners will have access to the new demo’s locations a little earlier. The village section arrives on April 17 (5 PM PDT), while the castle part lands on April 24 (5 PM PDT). Both will be available for just eight hours, and players have 30 minutes to explore.

Elsewhere at the show, we were given another taste of the Resident Evil: Infinite Darkness anime series, which will arrive on Netflix in July. Check it out below.

Capcom also revealed that The Mercenaries bonus mode is returning in Village, bringing the same arcade-like experience seen in previous Resi titles. As with the main game, players will be able to buy items and upgrades from the Duke’s Emporium. There are also weapon customizations and special abilities available. It looks as if The Mercenaries mode will offer plenty more hours of entertainment once you’ve finished the solo campaign.

Capcom is ramping up the hype as Village’s launch date draws near. More gameplay footage dropped earlier this month, confirming the camera mode, and the company is using life-size cutouts of internet favorite Lady Dimitrescu in a promotional campaign.

AMD Ryzen 7 5800U Review: Fight for the Ultraportable Performance Throne