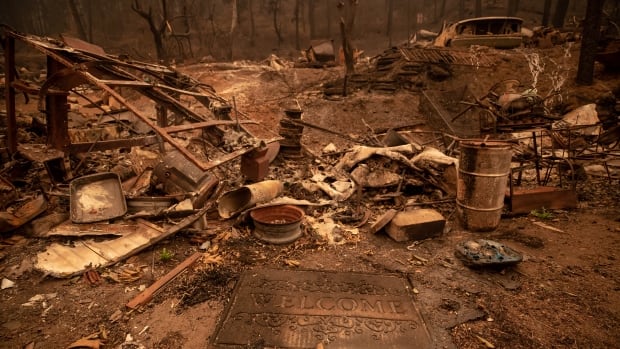 Residents of B.C. community return to assess damage as wildfires continue across province

Some residents of Monte Lake, a small B.C. community devastated by the White Rock Lake fire, were able to view the damage first-hand as the district confirmed on Saturday that 28 residences and one business have been lost.

Some residents of Monte Lake, a small B.C. community devastated by the White Rock Lake fire, have been able to view the damage first-hand as the district confirmed on Saturday that 28 residences and one business have been lost.

The community was evacuated on Aug. 5 after the White Rock Lake fire, burning between Vernon and Kamloops, jumped Highway 97 and scorched structures in the town.

Ian Hayes and his wife Brenda were forced to flee their home as the fire approached.

On Saturday they returned to see what remained of their home, which was only the cement stairs and metal railing that used to lead up to their front door.

“It was beautiful here. Now look at it.”

The Hayes said they are committed to coming back to the community and rebuilding.

“This place is like a big family,” said Hayes. “Everybody’s hurting. What can you do? Rebuild, regain your life and go on.”

The Thompson-Nicola Regional District said conditions are currently safe enough for some property owners in Monte Lake and the Paxton Valley to assess the damage themselves, although the situation remains volatile.

Andrew Roebbelen, a spokesperson for the district said that it’s possible other structures in Monte Lake were destroyed beyond the 29 confirmed on Saturday.

Hugh said the fire was so intense it destroyed a $400 fireproof box he had bought to protect his Wayne Gretzky rookie hockey card.

“I got to enjoy Wayne for many, many years. Some things we just don’t get rid of in our lives up until we’re forced to,” Hugh said. “Poor Wayne. He got burned up.”

Hugh did find his 12-year-old black cat, Scratch, alive and well when he came back to take a tour of what remained of his home on Saturday.

“He was just sitting here, waiting like nothing happened.”

Hugh said officials from the Thompson-Nicola Regional District left food and water for the kitty, so he got attention and was well looked after.

He described his emotions since the start of the fire about a week ago as a “roller-coaster” alternating with being sad for his own loss and that of his neighbours.

“I came back to find that some things I thought would be burned up weren’t burned up,” he said.

“So you know, in every situation there is a silver lining. Sometimes it’s difficult to look for it but, but here it is. My cat is still alive.”

He remembered the morning the fire came in as a beautiful and sunny day, although he could see tongues of flames in the distance and hear the roar of helicopters above as they tried to extinguish them.

“Then the wind picked up and debris started flying around.”

Within minutes, he said, the fire was in their community and he and his wife had to flee. They were prepared to flee.

The couple moved into Quail Lodge, Kamloops, which is about a half-hour drive from their home.

Hugh remained in his home during the 2017 wildfires and was happy with the government’s response then. He had hoped officials would have a similar strategy this year too.

He said he didn’t like what he characterized as the province’s paternalistic approach this time around, refusing to let residents stay and help battle the fires.

The B.C. Wildfire Service said it is preparing for a potential increase in lightning strikes and shifting winds as cooler weather is forecast over the next few days. More than 6,000 properties across the province have been evacuated as upwards of 270 fires continue to burn.

Anyone placed under an evacuation order should leave the area immediately.

Evacuation centres have been set up throughout the province to assist anyone evacuating from a community under threat from a wildfire. To find the centre closest to you, visit the Emergency Management B.C. website.

Evacuees are encouraged to register with Emergency Support Services online, whether or not they access services at an evacuation centre.

With files from David French, Rachael Adams, Katie Nicholson and the Canadian Press