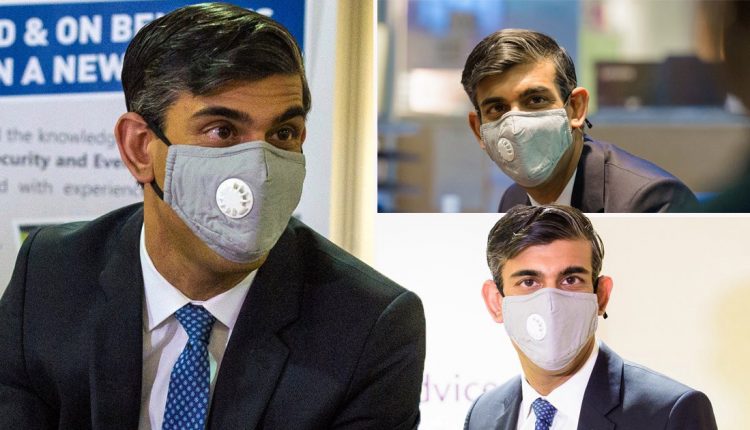 Chancellor Rishi Sunak has been criticised for wearing a vented face mask that one doctor said was worse than no covering at all.

A picture of Mr Sunak posted to his Twitter account on Wednesday showed him leaving a Pret a Manger while wearing a grey mask fitted with a valve.

Valved masks filter incoming air but do not filter it on the way out, and scientists have repeatedly urged people against wearing them for fear they could spread germs further.

Oxford University medical professor Trisha Greenhalgh responded that they ‘make the exhalation into a jet’.

She tweeted: ‘Not that one Rishi. One without a valve. Way to go,’ and later corrected another user who suggested Mr Sunak’s mask was better than nothing.

Former Tory MP and London mayoral candidate Rory Stewart added: ‘A little guidance maybe [sic] needed on mask types – the key point of masks is to protect OTHERS from your own breathing’.

Earlier this month, Dr Bharat Pankhania, a senior clinical lecturer at the University of Exeter Medical School, told LBC that valves create a ‘high velocity flow of air from the mouth out through the valve which could create a plume of infection’.

In May a study by doctors at the University of Palermo in Italy warned valved masks ‘may be an additional and under-recognised transmission source’ as they ‘pose major concerns about outward protection’.

Some cities and counties in the US have banned their use outright.

The government was previously criticised for appearing to promote the same type of mask after one was shown in an official clip posted to Downing Street’s Twitter account.

The tweet said face coverings were meant to ‘protect others’ and followed Tuesday’s announcement that the use of masks will become compulsory in shops in England from July 24.

Despite the concerns, Mr Sunak was pictured wearing the same mask for a second day, while talking to staff at a job centre in Barking, east London.

The government has also been criticised for confusing messaging around the new announcement.

While some ministers have suggested masks would only be compulsory in shops, the Cabinet Office’s Covid-19 guidance was updated on Tuesday to say face coverings are ‘strongly encouraged’ in other ‘enclosed public spaces where social distancing may be difficult and where you come into contact with people you do not normally meet.’

Cabinet Office minister Michael Gove was pictured leaving a pret on the same day without a mask on.

Asked about the incident on Sky News, Health Secretary Matt Hancock said: ‘You do need to wear a face mask in Pret because Pret is a shop.’

‘If there’s table service, it is not necessary to have a mask. But in any shop, you do need a mask.

‘So, if you’re going up to the counter in Pret to buy takeaway that is a shop… but if you go to your local pub you can’t go to the bar.’

Responding to concerns earlier that day, Mr Sunak said: ‘I think that people are intelligent. I think that people can understand this is a novel virus with specific challenges. There are appropriate moments of course when a direct message to say to people “don’t do X” or “do do Y” is appropriate.