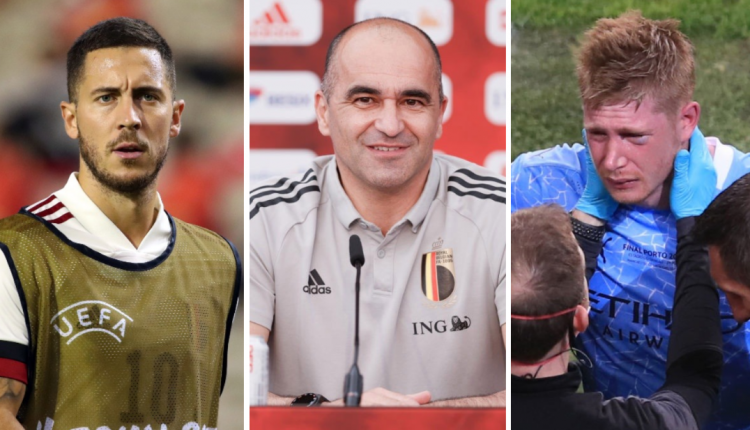 The Belgium head coach may have been fearing the worst as an emotional De Bruyne was forced off in Manchester City’s Champions League final defeat with an acute fracture of the nose and an orbital fracture to his left eye socket following a collision with Chelsea’s Antonio Rudiger.

But the 29-year-old reacted well to surgery and there are hopes he could feature in Belgium’s second Group B clash against Denmark on June 17.

De Bruyne may not even be required to wear a protective mask and Martinez believes the attacking midfielder looked ‘fresh’ and ‘ready’ to compete as he joined up with his team-mates at their training camp on Monday.

‘He has joined the group and that’s fantastic news,’ Martinez told reporters at a press conference on Tuesday.

‘He looks ready, he looks fresh and just for him walking into the dining room was a real highlight of the day.

‘He watched the Croatia game and he’s already in the mood of the team and is looking forward to slowly taking his own pace with the medical team.

‘But it makes a big difference when he’s with the players and is part of the group.’

‘It’s still a very fresh one, so will take a few days but the initial reaction has been really positive and he seems ready.

There have also been question marks surrounding the fitness of Eden Hazard, who endured another disappointing injury-plagued season with Real Madrid.

But Hazard came off the bench towards the end of Belgium’s warm-up victory over Croatia and Martinez is confident the forward can play a key role at the tournament.

‘I think the target for Eden was to be on the pitch against Croatia and I think that was almost a psychological step,’ the Spaniard said.

‘You need to be on the pitch, in a match scenario and it doesn’t matter the minutes.

‘It wasn’t the case Eden needs to play bigger chunks of time on the pitch but I think the next step, now, will be in training to try to get the match intensity.

‘It was a needed step; it wasn’t about the minutes, it was about being able to make that step without risk, in a safe manner and that is what we did.

‘I think it will be difficult to tell when he will be ready [to start]. It will depend on a lot of things how the game goes, what is the scoreline, how demanding the game can be in and out of possession.

‘What is important is now he is medically fit and now we have a good build up of five days before the Russia game and then it will be about quality.

‘I’m not too concerned about the minutes and I think it’s a different approach – it’s a tournament where we need to think, we have five substitutes. It’s not a lot about the starting XI.

‘It’s about every player when he’s on the pitch can make a contribution. Five substitutes means almost 50 per cent of the outfield players can almost share the minutes, so I think that approach is going to be very important in this tournament.’


MORE : Chelsea open to offers for Callum Hudson-Odoi this summer


MORE : ‘He can be dangerous’ – Arsene Wenger says Eden Hazard can have ‘massive’ Euro 2020 if fully fit