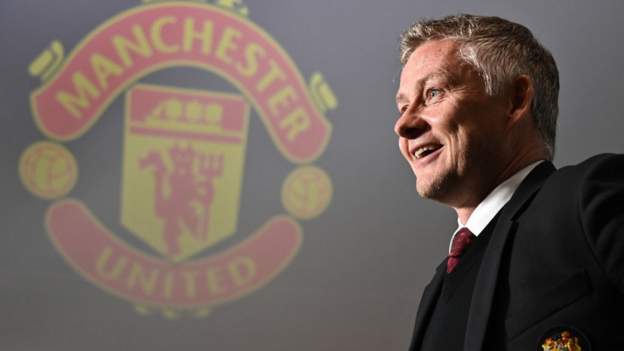 Manchester United have made it to their first major final in any competition under Ole Gunnar Solskjaer, having lost in four previous semi-finalsAfter three weeks in which the men who run Manchester United have been pilloried by their own fans and branded snakes by the Uefa president, advancing past Roma to reach the Europa League final can at least give them satisfaction from one bold show of faith that is one step from being rewarded.

Having given Ole Gunnar Solskjaer a three-year contract as permanent United boss in 2019, just as results were nosediving towards a torrid end to the season that ended with a home defeat by already relegated Cardiff, there have been at least two occasions since when many wondered if the Glazer family and executive vice-chairman Ed Woodward would get rid of the Norwegian.

The most recent came at the beginning of December, as United went out of the Champions League at the group stage.

Those external calls for Mauricio Pochettino to be installed in Solskjaer’s place were resisted.

Two days after Pochettino’s Paris St-Germain side were dumped out of Europe by one Manchester club, the other reached their first final since 2017 and the first under Solskjaer.

Manchester United through to Europa League final despite lossListen to the latest Football Daily podcastProviding the forthcoming fixture pile-up Solskjaer is so annoyed about doesn’t wreck his team over the last five games of their domestic programme, they will finish second in the Premier League for only the second time since Sir Alex Ferguson retired in 2013. In doing so, they will be closer to the champions in points terms since that same point.

Given their best effort so far is finishing 15 points adrift of Leicester under Louis van Gaal in 2016, that is not much to write home about. However, as they were 33 points behind Liverpool last term, more than halving the deficit has to be viewed as progress in a season of huge difficulty for everyone.

“I am always happy, no matter what anyone thinks,” said Solskjaer.

“We have had our ups and downs but while I am disappointed to lose the game, we are in the final and have given ourselves a good end to the season. I am so happy for the boys that they’ve got something to look forward to.”

Something has to give in the meeting with Villarreal in Gdansk on 26 May.

In four previous meetings with the Spanish side, all in the Champions League group phase, neither side has scored a goal. Arguably, the most notable moment in all four games came in the first, when Wayne Rooney was sent off for sarcastically applauding referee Kim Milton Nielsen to earn himself a second yellow card.

As their 14 European games so far this season have yielded 49 goals, a boring Polish stalemate appears unlikely.

By the time the final comes around, more should be known about Edinson Cavani’s future and, possibly, also that of Paul Pogba, whose contract expires in 2022, the same time as that of his manager.

Solskjaer’s renewal would seem to be automatic. After everything he has been through since he was brought in to replace Jose Mourinho and execute a cultural reboot of the club, including being United’s public face in answering questions about the European Super League and the protests that caused the game with Liverpool to be postponed, many will believe he has definitely earned it.

The Northern Bank Job: The biggest bank heist in British and Irish history is revisitedLife Changing: What’s it like to lose all your memories overnight?

Arsenal ‘devastated’ by Europa League exit but where does club go now?