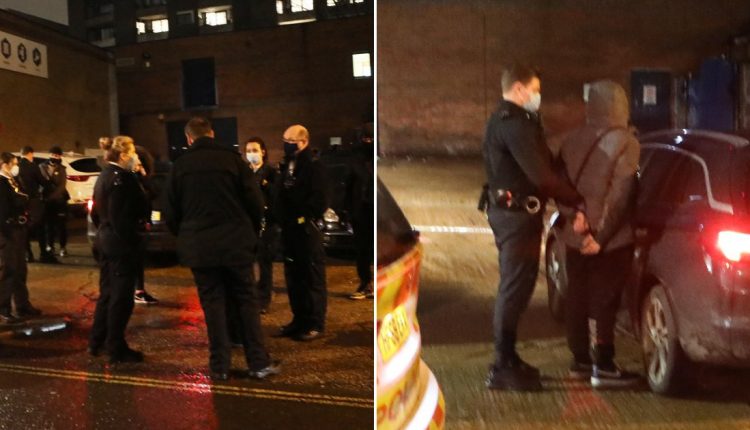 Up to 100 revellers crammed into a house party in Hertfordshire last night – hours after more than 1,500 Covid patients were reported dead on the UK’s deadliest day.

Officers in London were also left ‘astounded’ after more than 20 people partied on a Southwark rooftop as figures showed more than 10,000 people in the capital have now died with coronavirus.

One person was arrested after an officer was injured while shutting down the gathering in South Mimms, Hertfordshire.

A number of Covid fines were issued and a Section 35 dispersal order put in place after officers were called to the scene at around 9pm.

Reports on social media suggested there were around 50 to 100 people inside or near the house on Blanche Lane in Hertsmere, which is currently the second worst-hit area in the county.

Music equipment and alcohol were seized as officers blasted the party as ‘completely unacceptable’.

Inspector Kio Bozorgi said: ‘This is completely unacceptable behaviour and I would like to reassure the community that action is being taken.

‘Police have a variety of powers to their disposal which include powers of entry into premises to disrupt such activity.

‘With daily deaths over 1000, there is no good excuse to be breaking the lockdown rules.

‘We all have a duty to protect our NHS and help save lives and I would like to take this opportunity to remind residents to do the right thing and respect the rules.

‘Further enquiries will take place to establish the circumstances of this incident but I would like to remind you that renting accommodation in order to have a music event or gathering is not tolerated at this present time and lease holders found responsible will be prosecuted.’

Meanwhile, disgusted locals called the Met Police out after hearing loud music coming from the roof of a property on Pages Walk in Southwark.

Five people were slapped with coronavirus fines after more than 20 people were discovered drinking, eating and playing music at around 11pm, MailOnline reports.

Two people were arrested – one on suspicion of carrying an offensive weapon and another for suspected drug dealing.

The UK’s official death toll now stands at 84,767 – with 7,421 of these fatalities reported in the last seven days.

The country has officially seen 3,211,576 infections since the pandemic began with 47,525 cases reported yesterday.