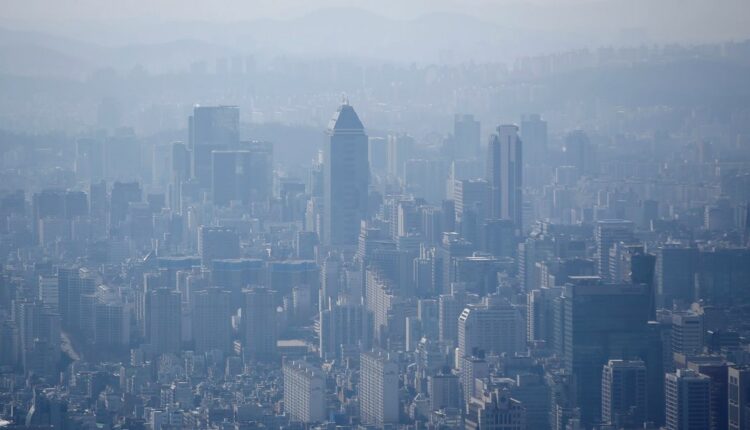 The skyline of central Seoul is seen during a foggy day in Seoul March 4, 2015. REUTERS/Kim Hong-Ji

“Our debt will exceed 50% (of the economy) in the medium-term, but, as we start to turn things around for a better fiscal standing we expect a sizable improvement in fiscal balance of payments next year,” a budget official at the finance ministry said.

The coronavirus pandemic has forced the left-leaning Moon Jae-in government to compromise on its fiscal goals, offering ambitious pandemic relief packages in six extra fiscal outlays since early last year. The debt-to-GDP ratio has ballooned from about 40% when it took office in 2017.

The Aug. 31 budget is seen as a balancing act between pouring funds into badly needed social services to tackle an ageing economy and reduce rising income inequality, while avoiding putting further strain on the country’s finances.

About a third of the total expenditure, 216.7 trillion won, will be allocated for welfare and jobs, to cover rising social costs as the fastest-aging economy among the Organization for Economic Co-operation and Development (OECD) creates long-term problems for the country.

The government has also earmarked 11.9 trillion won for spending on environment-related areas to work towards the country’s carbon neutrality goal by 2050, and proposed 55.2 trillion won in spending on national defense.

The finance ministry said it will issue 167.4 trillion won of bonds in 2022. The net increase in treasury bonds is projected at 94.9 trillion won.