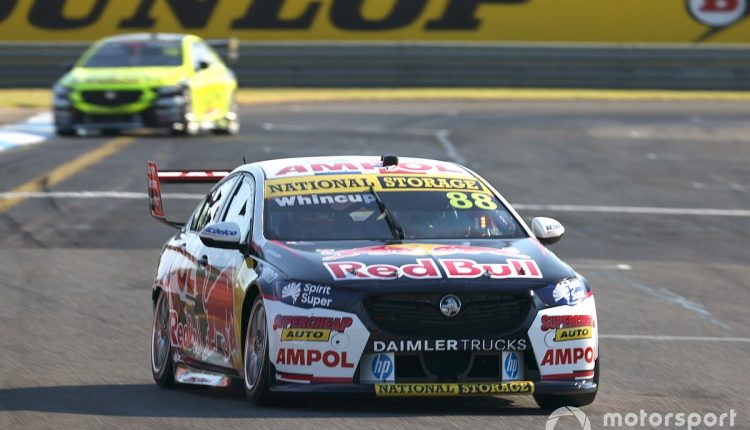 The Triple Eight driver left his run late in the half-hour session, only jumping to the top with a green tyre run right at the flag.

A 1m08.070s on that final lap was enough to edge Ford rival Cam Waters out to top spot, the margin between the title contenders just 0.08s.

Tim Slade was initially fastest when the chequered flag came out, only to be bumped back to third by Whincup and Waters.

Still, it was an impressive comeback in the spare Blanchard Racing Team chassis off the back of his heartbreaking crash at Bathurst last month.

“It’s a good way to start,” said Blanchard. “[There’s] a few little things to fix up, but it’s a good start.

“You can’t tell the difference [to the Bathurst car]. I never through it was going to be an issue, jumping into another chassis. This car is exactly how the guys want everyone, it’s kind of like the #1 BRT chassis. If anything it should be better.”

The session was a stern test for the Kiwi’s broken collarbone, however he passed with flying colours, even leading the way until the late flurry of times. He only slipped back after electing against a green tyre run at the end of the session.

Andre Heimgartner and Mark Winterbottom rounded out the Top 10.

It was a slow start for a number of contenders, including Chaz Mostert who currently sits second in the points. He could only manage the 13th fastest time, while the Dick Johnson Racing entries were 16th (Anton De Pasquale) and 19th (Will Davison).

Soccer-Arteta in shock after Arsenal thumped by Liverpool