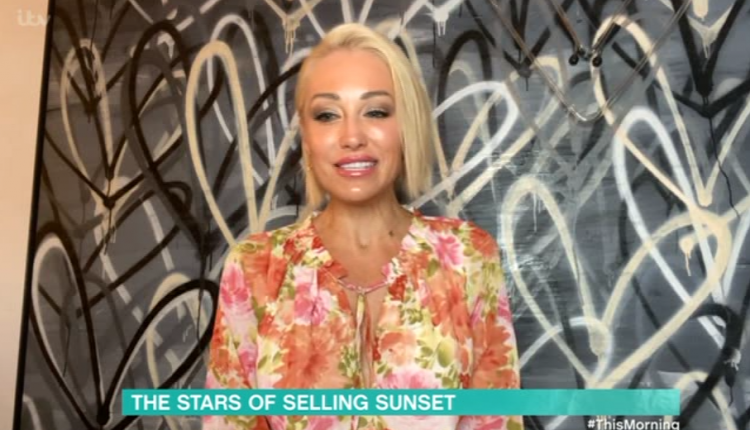 Selling Sunset’s Mary Fitzgerald has confessed she finds arguing with her female co-stars on the Netflix show ‘stressful’ and shrugged off any favouritism from her boss and ex Jason Oppenheim.

The real estate agent joined Holly Willoughby and Phillip Schofield on today’s episode of This Morning where she was grilled on what part she finds difficult in terms of filming the reality show.

‘It’s arguing with the girls,’ Mary said. ‘I can’t do conflict and I think a lot has happened since the show started.

‘Not only having a conflict with the girls but having the world see it… it’s kind of difficult with me, it’s kind of stressful.’

Phil then made a point of Mary’s past relationship with Jason.

‘It was a long time ago,’ Mary said of the romance.

‘There’s no favouritism. I think anything that I get I earn and most of all my clients are from referrals or from the show, he doesn’t give me that much.’

‘Some of the other girls think there’s favouritism,’ quipped Phil.

‘Yeah, I know they say that,’ Mary blushed.

The first series of the addictive programme documented how Mary and Jason were actually a romantic couple before she married chef and model Romain Bonnet.

Mary’s co-star Maya Vander previously told Metro.co.uk of that Jason is ‘very generous in helping her with real estate’.

‘I respect the relationship and everything but if I’m in LA and spending time selling, I would hope that he would help me and give me a potential client or something like that,’ she said.

‘It feels like it does go a little bit more towards Mary. She works hard too, no doubt.’

Selling Sunset is available to stream on Netflix and This Morning airs weekdays at 10am on ITV.