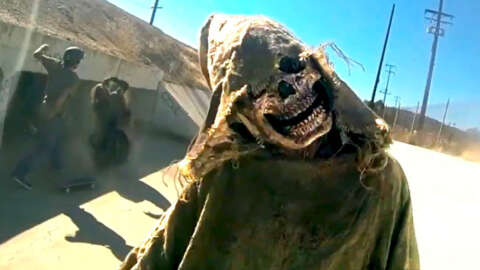 Horror streaming service Shudder is set to exclusively release the next movie in V/H/S series. The fourth film in the found footage anthology series is titled V/H/S/94.

Like the previous V/H/S movies, this latest entry features episodes written and directed by a variety of rising and established names in the genre. Filmmakers include Simon Barrett (The Guest, You’re Next), Timo Tjahjanto (May the Devil Take You), Jennifer Reeder (Knives & Skin), Ryan Prows (Lowlife), and Chloe Okuno (Slut). Barrett and Tjahjanto have made stories for previous V/H/S films. The movie doesn’t have a release date yet.

Shudder has also released a synopsis for V/H/S/94. It reads, “After the discovery of a mysterious VHS tape, a brutish police swat team launch a high intensity raid on a remote warehouse, only to discover a sinister cult compound whose collection of pre-recorded material uncovers a nightmarish conspiracy.”

The movie has already been filmed, and in a statement, producer Josh Goldbloom said, “Thrilled seems like an understatement for just how stoked we all are to partner with Shudder. We shot the film entirely during the pandemic, building sets in hotels, conference rooms, and in the spirit of the series punk rock roots we even ventured underground into a sewer. Our team channeled the misery of this past year appropriately, so rest assured it’s the biggest, baddest, and most bloodthirsty batch of tapes yet.”

The first V/H/S as released in 2012, and featured episodes directed by Adam Wingard (Godzilla vs Kong), David Bruckner (The Ritual), Ti West (The Innkeepers), and Joe Swanberg (Drinking Buddies). V/H/S/2 arrived the following year, with V/H/S: Viral released in 2014.