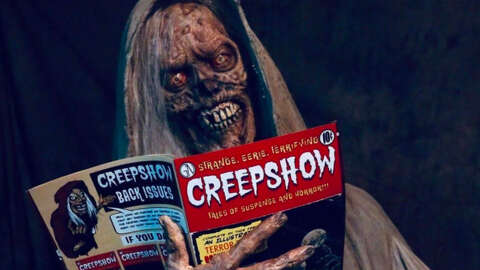 Shudder’s anthology series Creepshow has been renewed for Season 3. In addition, AMC’s horror streaming service has confirmed that Season 2 will be released on April 1.

Ahead of AMC Networks’ TCA winter tour presentation, the company confirmed that not only will the six-episode Season 3 start production soon, it will also be released later this year. The second season was originally expected to be released last year, but production was delayed due to the COVID-19 pandemic.

In a statement, showrunner Greg Nicotero explained, “During our season two production, Shudder was so pleased with what they were seeing that they asked us to roll right into production on a brand-new third season that will feature some of our most ambitious stories yet. I’m incredibly thankful to the team at Shudder for the opportunity to continue honoring the genre with more gleefully ghoulish tales over not one, but two new seasons of Creepshow this year.”

Nicotero previously revealed that the delay in Season 2 had given him time to work on scripts for a potential Season 3. There have also been two Creepshow specials released since Season 1 arrived in October 2019–an animated Halloween special written by Stephen King and his son Joe Hill, and a standalone Christmas episode.

Creepshow is based on the classic 1982 anthology movie, which was written by King and directed by legendary zombie filmmaker George Romero. Season 1 was the most watched show in Shudder’s history.

In related news, it was recently confirmed that AMC has renewed its documentary series Eli Roth’s History of Horror for Season 3. The show is hosted by Hostel director Roth and explores different sub-genres and themes within the genre. History of Horror Season 2 was released on AMC in October last year and is now also available on Shudder.