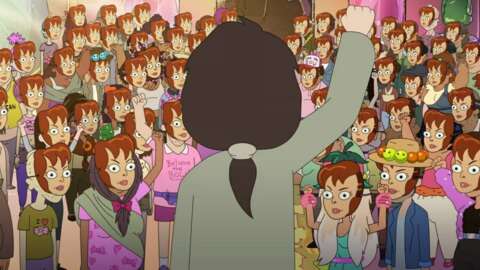 Solar Opposites Season 2 is now available to watch on Hulu and the latest trailer for the show is exceptionally bizarre. While Justin Roiland’s Rick and Morty is about humans traveling to other planets and dimensions, Solar Opposites is about aliens coming here and having to navigate our special human brand of weirdness. While that’s going on, though, the alien known as Yumyulack has a side hobby that involves miniaturizing random people and adding them to his terrarium.

Normally, we’d embed the trailer, but its “Age Restricted” status means you’ll have to click that link above to go view it. While Korvo, Yumyulack, and crew are out in the real world, all of Yumyulack’s hand-picked denizens are eking out an existence in his very own Kandor. Cherie (Christina Hendricks) has her own religion and the Duke (Alfred Molina) is working to maintain control. Meanwhile, Halk (Sterling K. Brown), war hero and former Bones executive producer, finds himself called to action to solve a series of murders.

Solar Opposites is a weird show.

If you’re not watching it, what are you even doing? All of Solar Opposites Season 2 is available right now on Hulu. Roiland co-created the show with former Rick and Morty writer Mike McMahan (who subsequently created Star Trek: Lower Decks). The primary cast features Justin Roiland (Korvo), Thomas Middleditch (Terry), Sean Giambrone (Yumyulack), and Mary Mack (Jesse). Solar Opposites initially received a two-season order, but Hulu greenlit a third season back in June, so you have a lot more to look forward to.