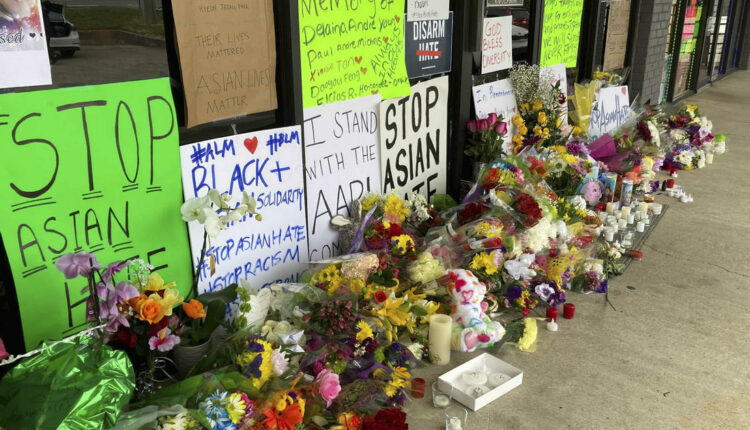 A man accused of killing eight people — six of them Asian women — at three Atlanta-area spas in March has pleaded guilty to killing four of the victims. Robert Aaron Long was sentenced to four life sentences by a Cherokee County judge, and is now expected to be transferred to Fulton County to face charges in the murders of the four other victims there.

During a hearing Tuesday, Long, 22, admitted to killing the four Cherokee County victims — Xiaojie “Emily” Tan, 49; Daoyou Feng, 44; Delaina Yaun, 33; and Paul Michels, 54. Prosecutors in Fulton County, where Suncha Kim, 69; Soon Chung Park, 74; Hyun Jung Grant, 51; and 63-year-old Yong Ae Yue were slain, have said they intend to seek hate crime enhancements and the death penalty. Long, who is White, is expected to be arraigned there before August 6.

Cherokee County prosecutors had planned to seek the death penalty but decided a plea deal would bring swift justice and avoid any lengthy appeals. That’s what the victims and their families who they were able to contact wanted, District Attorney Shannon Wallace said.

Cherokee County Superior Court Chief Judge Ellen McElyea accepted the plea deal after noting that two of the victims were not Asian, and one was male.

“Once hatred is given a gun, it doesn’t matter who gets in the way. We are all subject to being the victim of a hate crime, whether we belong to that group or not,” the judge said.

Long walked through the massage business in Woodstock “shooting anyone and everyone he saw,” Wallace said. But the prosecutor said he was motivated by a “sex addiction” and his desire to eliminate sources of his temptation, not by any hate against Asians.

Speaking at a press conference Tuesday, Wallace said the attacks happened during a time of increased hate-based violence against Asian Americans, and said her office was “acutely aware of these valid concerns.” But she described an exhaustive investigation into Long’s motives and said neither local authorities nor the FBI uncovered any evidence of a history of bigotry or racism against any ethnic group.

Wallace said her office had considered filing a hate crime enhancement based on gender bias had the case gone to trial, but said it would not have extended Long’s sentence.

Speaking in court, Long said that he had frequented the spas, watched pornography and was ashamed of his own sexual impulses, according to the Atlanta Journal Constitution. He said he considered killing himself before the attack, but described shifting blame from himself to those inside the spa.

“I wanted to stop the places and basically punish the people that I could …” Long told the judge.

Long said he killed Michels first after seeing him come out of a bathroom and then continued the deadly rampage, saying he didn’t recognize any of the victims, the paper reports.

“I don’t recall thinking much after I pulled the trigger first,” Long said. “My mind felt like it was blank.”

At the press conference, Wallace said Long spoke of the victims as if they were “nothing more than obstacles to overcoming his own failures” and called his motive “sick and twisted, and hard for the rational mind to comprehend.”

“The fact is, no one is to blame for the defendant’s failures and sins but the defendant himself,” Wallace said.

Flowers and signs of support left outside Young’s Asian Massage spa in Acworth, Georgia, on March 19, 2021, following the shootings there and at two other Atlanta-area spas that left eight people dead.

Wallace said the families of the victims wanted to see justice served without the yearslong appeals process and intense national spotlight that a death penalty case would bring.

Long’s defense team said that Long understands the gravity of his actions and wishes to take responsibility in Fulton County, as well, per the Atlanta Journal Constitution.

“The Cherokee County District Attorney Shannon Wallace worked with us to negotiate this case to achieve today’s result bringing finality in Cherokee County,” Long’s attorney, Zachary Smith, said in a statement released to the paper. “It is our hope that the Fulton County District Attorney follows D.A. Wallace’s example and agrees to a similar resolution in that county.”

Some family members spoke in court about the crime’s devastating impact. According to the paper, Michels’ widow Bonnie Michels told the judge she had been married to her husband, a business owner who served in the Army, for 24 years and had planned to grow old with him. A surviving victim who was shot and wounded, Elcias Hernandez-Ortiz, said he is thankful to God that he is alive, but the aftermath has been difficult for him and his family, including a 10-year-old daughter.

Wallace described the victims in the press conference, calling them hard-working and family-oriented people who had no idea their lives would be cut short by a “twisted, evil gunman” as they went about their daily routines. She said their families, the surviving victims, and the community at large have been forever impacted.

“We’ve brought closure for the families, ensuring a swift and firm sentence that confines the defendant behind bars for the remainder of his life,” Wallace said. “It is our hope that the legal outcome obtained today will bring some measure of peace and healing to all those impacted by this tragedy.”

Police have said the attacks began when Long shot and killed four people, three of them women and two of Asian descent, at Youngs Asian Massage just before 5 p.m. on March 16. He also shot and wounded a fifth person, Hernandez-Ortiz.

Long then drove south to Atlanta, where he shot and killed three women at Gold Spa before going across the the street to Aromatherapy Spa and fatally shooting another woman, police said. All of the Atlanta victims were women of Asian descent.

Georgia’s new hate crimes law does not provide for a stand-alone hate crime. After a person is convicted of an underlying crime, a jury must determine whether it’s motivated by bias, which carries an additional penalty.

A makeshift memorial is seen outside Gold Spa following the deadly shootings in Atlanta, Georgia, on March 18, 2021.

Police said that after the shootings at the two Atlanta spas, Long got back into his car and headed south.

By then, Long’s parents had called authorities to help after recognizing their son in still images from security video that the Cherokee County Sheriff’s Office posted on social media. His parents were already tracking his movements through an application on his phone, the prosecutor said, and that enabled authorities to track their son down Interstate 75.

State troopers and sheriff’s deputies spotted his SUV, and one of them forced Long to spin to a stop by bumping his vehicle. Long then surrendered to authorities in rural Crisp County, about 140 miles south of Atlanta.

Long told police his attack was not racially motivated, and a Cherokee sheriff’s spokesman said it did not appear to be a hate crime, prompting widespread skepticism and outrage.

“He apparently has an issue, what he considers a sex addiction, and sees these locations as something that allows him to go to these places, and it’s a temptation for him that he wanted to eliminate,” Cherokee sheriff’s Captain Jay Baker initially told reporters.

Baker also drew criticism for saying Long had “a really bad day,” and was removed from the case.

State Representative Bee Nguyen, the first Vietnamese American to serve in the Georgia House and a frequent advocate for women and communities of color, said the shootings appeared to be at the “intersection of gender-based violence, misogyny and xenophobia.” Advocates say Asian-American women struggle with both racism and sexism in a culture that often hypersexualizes and objectifies them. Women reported nearly 65% of anti-Asian hate incidents nationally between March 2020 and March 2021, according to data released by the advocacy group Stop AAPI Hate.

Editor’s note: In an earlier version of this story, The Associated Press reported an incomplete quote from the Cherokee County district attorney saying, “This was not any kind of hate crime.” The full quote is, “Your honor, in discussing this case with Mr. Burns, the defense’s position is that this was not any type of hate crime.”