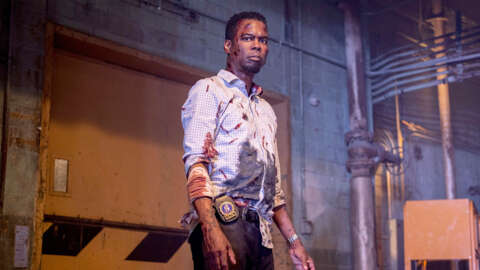 Spiral: From The Book Of Saw Gets Trapped-Filled New Trailer

The new trailer for Spiral: From the Book of Saw is here. The latest movie in the long-running Saw franchise hits theaters on May 14.

The film stars Chris Rock as Ezekiel Banks, a cop who is investigating a killer seemingly inspired by the notorious but very-dead trap-setting maniac Jigsaw. The new killer is leaving the distinctive spiral shape to mark his crimes–and Ezekiel’s former cop dad (Samuel L. Jackson) might be involved somehow. The trailer suggests the movie will combine the inventively nasty horror of the previous films with a Seven-style cop thriller–check it out below:

This is the ninth movie in the series, which kicked off with James Wan’s Saw in 2001. In an interview with Horror Geek Life, Bousman suggested that Spiral would be very different from its predecessors. “It’s unlike any of the Saw films that have come before it,” he said. “This is the ninth version of the Saw movie and I think that, for me, the last few films, they kind of follow the same formula. They’re great, but they kind of follow the same formula. This does not. This is completely it’s own thing.”

Spiral reactions have arrived on Twitter, days ahead of the release of the film. Saw is one of several long-running horror franchises returning to screens over the next 12 months. The Forever Purge hits theatres in July, while Candyman and Halloween Kills arrive in September and October respectively. Beyond that, Scream releases in January 2022, and there’s also a new Texas Chainsaw Massacre sequel expected soon.

GameStop Hires A “Growth” Officer To Help Transform The Company