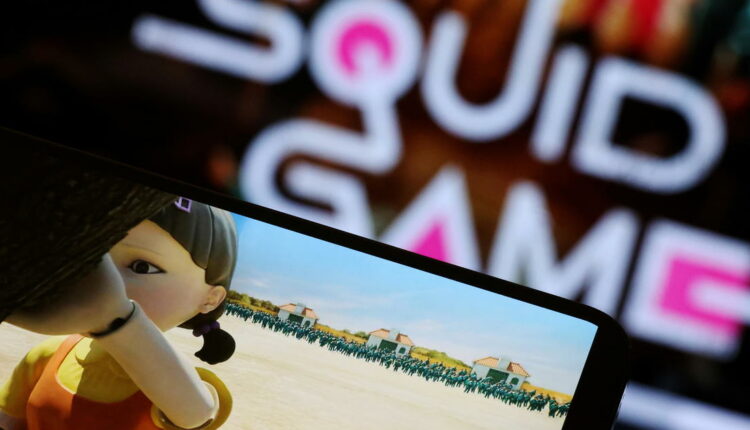 “Squid Game” costumes are hot. Getting one may cost you.

The surprise popularity of Netflix’s “Squid Game” — a horror series that offers a critique of capitalism — is creating a raft of hot new Halloween outfits. But people who hope to find costumes before October 31 may learn another lesson in capitalism: You may have to pay extra to get one in time.

Amazon.com has plenty of options, with third-party manufacturers and retailers jumping into the fray. But because many of them ship from Asia, the products at this point may not arrive in time for Halloween — unless you pay up for expedited shipping.

Take this $25 teal tracksuit with 001 on its front — the number worn by the character Oh Il-nam (played by O Yeong-su), an old man in the deadly game. Since the tracksuit costume is shipped from China, a customer in the U.S. at this point would have to pay an extra $59 to ensure it arrives before the end of October, or more than twice the actual cost of the product. Without ponying up the extra $59, the costume might not arrive until November, according to Amazon’s shipping estimate.

On Etsy, some sellers also warn that products may not arrive in time, like this $50 teal tracksuit that you can order with one of six numbers on the front, which are worn by the show’s main characters. “For orders AFTER October 7th, we CAN NOT guarantee delivery before Halloween,” the seller notes.

To be sure, there are some “Squid Game” costumes that will arrive before Halloween or may cost less in shipping, but fans should check the shipping dates carefully to make sure they purchase one that will arrive on their doorstep before October 31.

🦑 – Squid Game tracksuits are currently number one on Amazon in the Adult Costume category. pic.twitter.com/lhafwMDcbU

Amazon declined to comment on the popularity of “Squid Game” costumes, whether the products are selling out and if some customers may not get the products in time.

The reason for the popularity of the costumes boils down to a couple of key points. For one, the show is drawing viewers via word of mouth and strong reviews, with Netflix co-CEO Ted Sarandos saying at a recent conference that the show could become its most popular show ever. Secondly, the costumes worn by the actors — from the guards to the players — are simple yet visually arresting.

But it’s not only “Squid Game” costumes that may be delayed or hard to get this Halloween. Because of snags in the supply chain due to worker shortages, it’s taking longer for all kinds of products to reach store shelves. Among the consumer offerings that have been impacted are Halloween decor as well as costumes, the Wall Street Journal reported.

Can’t wait for everyone and their mother to be in squid game costumes this Halloween. pic.twitter.com/V7UdHaJ8yh

That could be a frightful surprise for some Americans who are ready to get into the Halloween spirit after more than a year of COVID-related shutdowns, remote work and remote school. Consumers are expected to shell out a record $10.14 billion on Halloween-related goods this year, a jump of 26% from a year earlier, according to the National Retail Federation, a trade group.

White VansAnother signature clothing article from “Squid Game” is witnessing a huge spike in demand. White Vans slip-on sneakers, which are worn by the 456 contestants in the “Squid Game” competition, have seen a 7,800% surge in sales since the show debuted on Netflix last month, shoe site Sole Supplier said on October 7.

Demand for white Vans has increased another 70% over the weekend, and some retailers are now sold out, a spokeswoman for Sole Supplier told CBS MoneyWatch. Resale prices of used white Vans are also surging, with prices rising from about $50 last week to $125 over the weekend, she added.

Have you equipped yourself with Squid Game’s shoes ?

Vans parent company declined to comment on “Squid Game” or the impact on shoe sales, citing the quiet period before it reports quarterly earnings on October 22.

Other companies are edging into the “Squid Game” merchandise market, but products may not be yet be available. Walmart on Monday said it is pairing with Netflix to create a merchandizing hub that will “bring popular stories to life” — among them, “Squid Game.” But the T-shirts that will be sold at the hub aren’t yet available.

At Party City, a search for “Squid Game” costumes returns costumes for the unrelated show “Money Heist,” as well as red or blue jumpsuits — not exactly the same shade as the memorable pink jumpsuits worn by the masked guards in the series.

Netflix has its own merchandise store, where it sells teal sweatshirts that you can emblazon with one of four numbers worn by the show’s central characters, like the 456 worn by Gi-Hun (Lee Jung-jae) or the aforementioned 001. But the sweatshirts don’t ship for three to four weeks, making them impossible to receive before Halloween.

The Bidens attend wedding of nephew and “Real Housewives” star