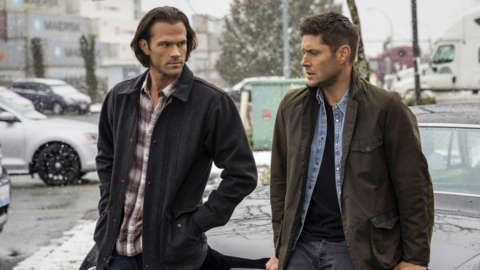 It’s been one hell of a journey over 15 years, but we’ve reached the end of filming on Supernatural. On Thursday, Sept. 10, which marked the show’s final day of shooting, the cast and crew flooded social media with memories and special tributes to honor their time with the series. If you thought you’d finally come to grips with saying goodbye, these sentimental messages might be the thing to undo all of that.

Jared Padalecki, who plays Sam Winchester, delivered a heartfelt post that may or may not have sent us into an emotional spiral. “I write this as I head to my last day of #Supernatural… My last day with #SamWinchester,” he wrote, noting he’d have more to say later. “Obviously, my head is spinning and my emotions are stratospheric, but there’s still a bit of time left on the clock. Thank y’all SO MUCH for the incredible amount of love and support that’s been headed our way, in these final hours. It’s definitely been felt.”

Creator Eric Kripke reminisced on the first scene shot for Supernatural. Both he and Jim Beaver, who plays Bobby Singer, honored late producer and director Kim Manners in their posts.

So it’s here. Last day of principal photography on Supernatural, my home for 15 years. Getting ready to go to work on it for the final time. Deep feelings. Very deep. I love these people. Okay. Let’s go kick it in the ass one last time. pic.twitter.com/oRlalucX3h

On Wednesday, Jensen Ackles, aka Dean Winchester, posted a short video bidding farewell to the Men of Letters Bunker, which had been the Winchesters’ home for the last few years.

Misha Collins, who plays Castiel, touched on the show’s impact on his life.

And Felicia Day, who plays Charlie, remembered eight years of portraying the character.

Jake Abel, who plays the Winchesters’ half-brother Adam, referenced the show’s unofficial theme, “Carry On Wayward Son” by Kansas, in his tribute.

Rob Benedict, who plays Chuck, aka God, wished his Supernatural cohorts well on the last day of filming.

Richard Speight Jr., who plays the Trickster, aka the archangel Gabriel, opened up about his incredible journey on the show.

My son Steve when I did my 1st episode of #Supernatural in 2007 & today on the show’s last day of shooting. What a long & amazing ride. From janitor to director, I’ll never have another experience like I’ve had on this show. Or a better TV family. Cheers to you all. ❤️ #SPNFamily pic.twitter.com/zOR5nEPzZs

Samantha Smith, who plays Sam and Dean’s mother, Mary Winchester, shared a photo of the show’s massive cast and crew.

Julie McNiven, who plays the fallen angel Anna Milton, congratulated everyone involved in the series.

You showrunner Sera Gamble, who served as a producer on Supernatural from 2007-2012, sent love to her former cast and crewmates.

Sebastian Roché, who plays Balthazar, paid tribute to his time on the show while joking about a reboot with Jensen Ackles, Jared Padalecki, and Misha Collins’ kids.

Kim Rhodes, who plays beloved sheriff Jody Mills, honored her time on the series by sharing sentimental photos and videos.

After going in hiatus amid COVID-19, production on the show’s remaining two episodes resumed on Tuesday, Aug 18. According to Ackles, those final episodes will give fans different kinds of closure.

The remaining episodes will find a reinvigorated Team Free Will working to stop Chuck (Rob Benedict) from delivering his diabolical ending, in which at least one Winchester dies. Expect plenty of familiar faces to drop by, including Charlie (Felicia Day) and Adam (Jake Abel), as we approach the end.