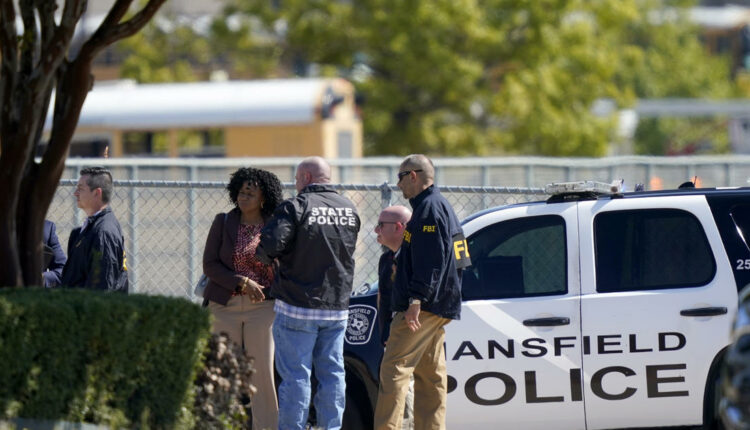 Suspect in custody after 4 injured in Texas school shooting

An 18-year-old suspect was taken into custody Wednesday after four people were injured in a shooting at a Texas high school, authorities said. Three of the victims were hospitalized, with at least one requiring surgery.

Around 9:15 a.m., police responded to a call about a shooting on the second floor of Timberview High School in Arlington, according to Kevin Kolbye, the city’s assistant police chief. Two of the victims were shot but were expected to survive, Kolbye said.

The suspect, Timothy George Simpkins, initially fled the scene but later turned himself in without incident, officials said. Simpkins will be charged with three counts of aggravated assault with a deadly weapon, they said.

A handgun was recovered in the streets, Kolbye said, adding that it will be turned over to the Bureau of Alcohol, Tobacco, Firearms and Explosives. Police have not confirmed if the handgun was the weapon used in the shooting.

Preliminary information suggested two students began fighting in class when a gun was pulled, according to Kolbye. Panicked students and staff barricaded doors with their desks and hid inside their classrooms.

Dale Topham, a teacher at the school, was close by. “My mindset was if someone gets through that barricade which they won’t but if they do they would have to take me out first,” Topham told CBS News.

Families waiting to be reunited with their children on October 6, 2021, in Mansfield, Texas.

Students at the high school were evacuated to a nearby performing arts center to meet their parents, the school district said. One parent said her son called her to inform her of the shooting, telling her he was in the classroom next to where the shooting occurred.

“Thank God for FaceTime because I could see him, and he was calm,” she told CBS Dallas Fort-Worth. “But it’s just so scary.”

Her son was unharmed but she worried about how the shooting would affect him long-term. “My son heard those gunshots, and I’m wondering now, we’ve gotta process this, we’ve gotta make sure that we’re gonna be OK,” she told the station.

So far, there have been 21 school shootings this year, according to Education Week. Last year, there were only 10 shootings while most kids were doing remote learning over COVID-19 concerns.

Student taken into custody after shooting at Texas high school