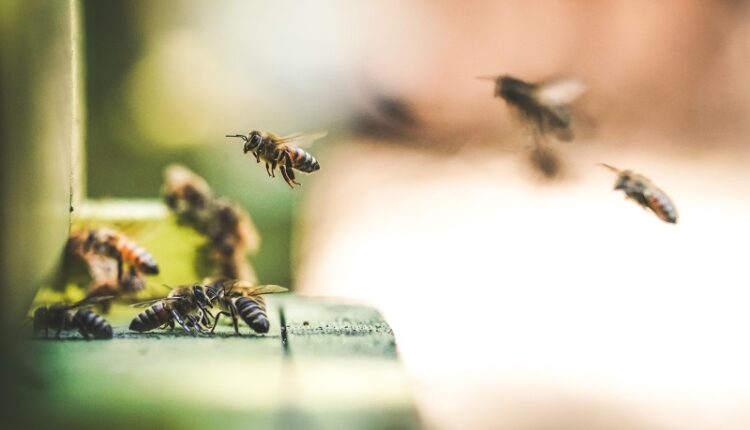 Swarming bees produce so much electricity that they may affect local weather, new research suggests.

The finding, which researchers made by measuring the electrical fields around honeybee (apis mellifera) hives, reveals that bees can produce as much atmospheric electricity as a thunderstorm. This can play an important role in steering dust to shape unpredictable weather patterns; and their impact may even need to be included in future climate models.

Insects’ tiny bodies can pick up positive charge while they forage — either from the friction of air molecules against their rapidly beating wings (honeybees can flap their wings more than 230 times a second) or from landing onto electrically charged surfaces. But the effects of these tiny charges were previously assumed to be on a small scale. Now, a new study, published Oct. 24 in the journal iScience, shows that insects can generate a shocking amount of electricity.

“We only recently discovered that biology and static electric fields are intimately linked and that there are many unsuspected links that can exist over different spatial scales, ranging from microbes in the soil and plant-pollinator interactions to insect swarms and the global electric circuit,” first author Ellard Hunting, a biologist at the University of Bristol, told Live Science.

Static electricity emerges when the microscopic bumps and pits on two surfaces rub over each other, causing friction. This causes electrons, which are negatively charged, to jump from one surface to another, leaving one surface positively charged while the other surface becomes negatively charged. The transfer across the two ionized surfaces sets up a voltage difference, or potential gradient, across which the charges may leap.

This electrostatic potential gradient — which can give you a shock when touching a doorknob after walking across a carpet — can also charge lightning through the friction of ice clumps inside clouds; legend has it this phenomenon was demonstrated by Benjamin Franklin when he and his son flew a kite during a thunderstorm, noting that the kite’s wet string conducted sparks from the stormcloud to a key attached to its end.

Electrostatic effects emerge throughout the insect world; they enable bees to draw pollen to them, and help spiders spin negatively charged webs that attract and ensnare the positively charged bodies of their prey.

To test whether honeybees produce sizable changes in the electric field of our atmosphere, the researchers placed an electric field monitor and a camera near the site of several honeybee colonies. In the 3 minutes that the insects flooded into the air, the researchers found that the potential gradient above the hives increased to 100 volts per meter. In other swarming events, the scientists measured the effect as high as 1,000 volts per meter, making the charge density of a large honeybee swarm roughly six times greater than electrified dust storms and eight times greater than a stormcloud.

The scientists also found that denser insect clouds meant bigger electrical fields — an observation that enabled them to model other swarming insects such as locusts and butterflies.

Locusts often swarm to “biblical scales,” the scientists said, creating thick clouds 460 square miles (1,191 square kilometers) in size and packing up to 80 million locusts into less than half a square mile (1.3 square km). The researchers’ model predicted that swarming locusts’ effect on the atmospheric electric field was staggering, generating densities of electric charge similar to those made by thunderstorms.

The researchers say it’s unlikely the insects are producing storms themselves, but even when potential gradients don’t meet the conditions to make lightning, they can still have other effects on the weather. Electric fields in the atmosphere can ionize particles of dust and pollutants, changing their movement in unpredictable ways. As dust can scatter sunlight, knowing how it moves and where it settles is important to understanding a region’s climate.

“Interdisciplinarity is valuable here — electric charge can seem like it lives solely in physics, but it is important to know how aware the whole natural world is of electricity in the atmosphere,” Hunting said. “Thinking more broadly, linking biology and physics might help with many puzzling problems, such as why large dust particles are found so far from the Sahara.”

How to Choose a Career Path in Education