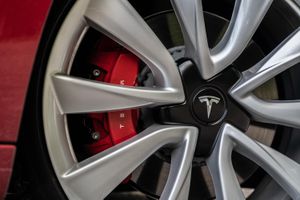 Tesla has asked a US appeals court to immediately reinstate a regulation dating back to 2015 that would bump emissions penalties from $5.50 to $14 per each tenth of a mile per gallon that a manufacturer’s fleet average falls short. Reuters reported on Tesla’s lobbying actions Wednesday after the National Highway Traffic Safety Administration under former President Donald Trump delayed the fine increase to the 2022 model year.

The fine increase was meant to go into effect in 2019, but ongoing legal action left enforcement in limbo. In the electric carmaker’s argument, it said the action under the Trump administration “diminishes the value of performance-based incentives that electric vehicle manufacturers, such as Tesla, accrue under the standards.” Tesla does not operate a public relations department to field requests for comment.

Tesla has plenty of incentive to make these fines go into effect more quickly. The automaker makes the vast majority of its profits selling regulatory credits to other automakers since Tesla does not sell vehicles that produce tailpipe emissions. If other automakers need to pay more, Tesla can sell more credits.

NHTSA said in January when it announced the delay the compromise meant automakers would not be on the hook for cars built in the past. In other words, the new fines meant to start in 2019 wouldn’t cost automakers money almost two years later. We’ll likely see major changes to emissions and fuel economy regulations under the Biden administration, which already ordered agencies to review changes the Trump administration made last year.

Climb in the driver’s seat for the latest car news and reviews, delivered to your inbox twice weekly.

England U21 0-1 Switzerland U21: Young Lions lose opening game at Euro U21 finals

Circuit Superstars is a welcome addition to the isometric racing genre

Niantic is shutting down Harry Potter: Wizards Unite in January 2022

You can now order pet food from PetSmart with DoorDash

Suit Up is an excellent little match-three game for mobile…