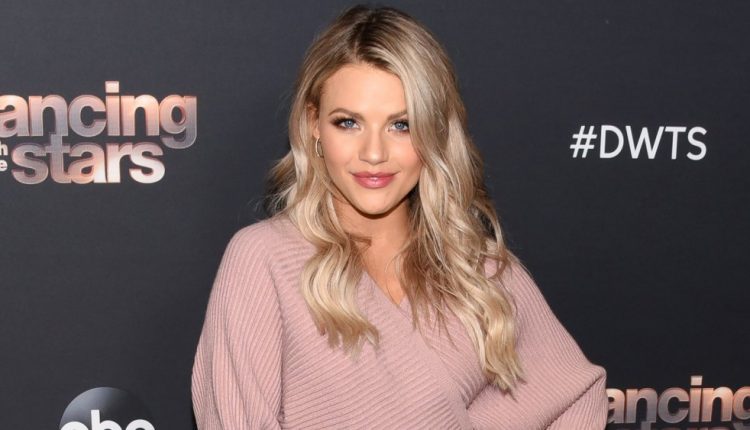 The Dancing With the Stars pro, 27, posted the first photo of her baby’s face on Wednesday, January 6, and revealed that he is named Kevin Leo to honor her late father-in-law, Kevin McCallister.

“Named after his grandpa who sent him down to us,” she captioned an Instagram snap of the newborn with a wooden name plaque with his middle name written on it. “Born on Jan. 3rd 2021 ✨ 7lbs. 2oz. 21” long!”

The So You Think You Can Dance alum added: “My little Leo, I love you more than words can express. You are the most precious gift. My life will forever be changed by your sweet spirit. Welcome to the world Leo 🦁.”

Carson’s father died in March 2018 after battling cancer for two years. Following his passing, the dancer paid tribute to her late father-in-law, noting how hard it would be to one day have children who would not know their grandfather.

“Although it will be excruciatingly painful at times to live without him, we know he lives on around us being our guardian angel wherever we go,” she captioned a black-and-white photo of the couple with her late father-in-law at the time. “It’s hard not to think, why does my husband have to live without his dad? Why do my kids not ever get to know their Poppy? & then I remember the Plan of Salvation, to know we will see him again … and that gives me peace.”

The Utah native continued: “I know Kevin is getting our kids ready to come down to meet us — he’s probably spinning them around on the floor right now, over and over again until they cry of laughter! We know you’ll be there when we can’t see you or hold you — lift us up when we have moments of trouble and heartache. Our guardian angel. We love you Kev.”

The new mom announced the arrival of Kevin Leo on Monday, January 4, after having an “unexpected C-section” and 24-hour labor.

“We are all healthy and well,” she wrote alongside a photo of her and Carson’s hands holding their son’s fingers. “We are so grateful & we’ve been soaking up every moment with our perfect angel boy. Thank you for all the prayers!”

The professional dancer shared a video from the first 24 hours with the couple’s baby, including footage from the hospital and Carson holding Kevin Leo shortly after his birth.

“Everyone tells you how special bringing life into this world is but you never know exactly what they mean until it happens to you. 😭,” she captioned the Instagram video on Tuesday, January 5. “This is my whole entire world.”

The new parents announced in July 2020 that they were expecting their first child together. The high school sweethearts, who started dating their senior year, tied the knot in January 2016, after a three-month engagement.