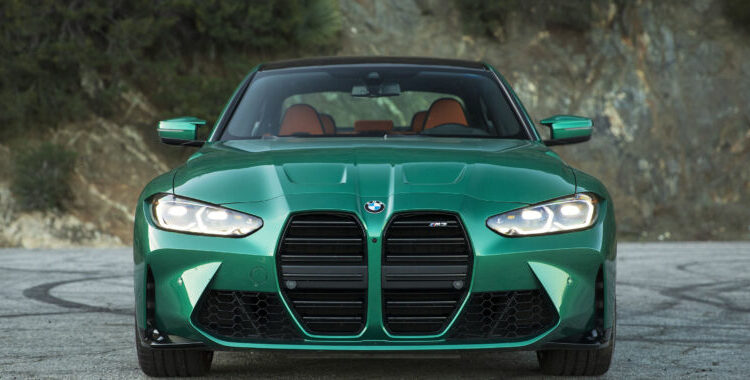 Over the past few months of gazing at images of the sixth-generation M3, and after spending a week with the new car, I’ve grown accustomed to its look. The front end no longer stuns and confuses me; it’s simply the style of the new M3. While that’s not exactly a ringing endorsement for the vehicle’s design, I’d like to think it offers a semblance of hope: with time, you can see past its ugly face.

More importantly, this new M car is notable for more than just its schnoz—there’s a reason the M3 has long been the benchmark by which all other luxury sports sedans are measured. Decades ago, the M3 helped establish the template for the everyday performance machine with a masterful blend of capability, comfort, and style. The vehicle’s mission remains much the same today, but the stakes are now higher than ever.

Starting at $70,895 and coming in at $90,295 as tested, this “base” M3 packs formidable performance cred, dishing out 473 hp (353 kW) and 406 lb-ft (550 Nm) of torque through its twin-turbocharged 3.0L S58 inline six-cylinder engine. That boosted mill sends power to the rear wheels through a six-speed manual transmission and an electronically controlled limited-slip differential. Spring for the Competition package and output jumps to 503 hp (375 kW) and 479 lb-ft (650 Nm), but this version can only be purchased with an eight-speed automatic transmission.

Yet despite its fire-breathing powertrain and Nürburgring-tuned chassis, the M3 is also highly civilized, delivering a supple ride and a quiet cabin during normal driving. BMW’s feature-packed iDrive 7 infotainment system is on board and boasts a sharp-looking 10.3-inch touchscreen, support for wireless Apple CarPlay and Android Auto, gesture controls, and myriad different options for user personalization and performance parameters alike. Fire up the new M Drift Analyzer—a feature sure to be a boon to body shops everywhere—and the system will even score your powerslides using real-time telemetry.

The M3 is built on the bones of the seventh-generation 3-Series, but it has grown a bit—the new car is 4.6 inches (117 mm) longer than its predecessor. Its width increased by 2.4 inches (61 mm) over the current garden-variety 3-Series as a result of the new car’s expanded track and flared-out fenders, so the M3’s dimensions are now on par with a 5-Series from the early 2000s.

That’s not necessarily a point against the car, though. Its low, wide stance gives it a legitimate presence, and if it weren’t for that nose, I’d argue that this is the best-looking M3 since the E46. This tester’s Isle of Man Green paint certainly helped strengthen the argument, and while the Kyalami Orange leather interior is a bolder choice than I’d be willing to make, it works here.

Sport seats are standard in the M3 and provide plenty of comfort for long hauls, but I found that they didn’t have enough bolstering to keep me in place while speeding down technical roads at the pace this car is capable of. Adjustable carbon-fiber-reinforced seats are available on both base and Competition models and offer a more snug, race-car-like fit, but they come at a compromise to comfort and will set you back $3,800.

Considering how well-behaved the M3 is around town, enthusiasts might not miss the additional cushiness. When the car is set to its default Comfort drive mode, the M3’s adaptive suspension soaks up all but the worst road imperfections with minimal fuss. Luxury is still a core component of the equation, and the M3 does a good job of isolating its passengers from the harshness of the outside world.

The M3’s six-speed manual gearbox keeps you actively involved in the proceedings, though. The clutch is well-weighted for a performance car, and its engagement point is right where you’d expect it to be. As is typical of BMW shifters, the throws are fairly short and have an oddly elastic tension to them as you transition from one gate to another. Automatic rev-matching ensures perfect downshifts every time, but the feature can be turned off for the purists who are looking to score some extra style points.

While opting for the automatic version nets you 30 hp (22 kW), the standard M3 certainly isn’t lacking for grunt. BMW says that the manually shifted M3 can hit 60 mph in 4.1 seconds (and 0-100 km/h takes 4.2 seconds), and I have no doubt that estimate is conservative. Out in the canyons, the S58 shoves this 3,800-pound (1,742 kg) car out of slow corners and down straight sections of road with genuine authority.

It could sound better

I wouldn’t mind a more emotive soundtrack, though. A button on the center console called Sound Control re-routes exhaust gases through a separate pathway for a livelier note, but it’s augmented by BMW’s Active Sound Design feature, which pipes in additional noise through the audio system when the drive mode is set to Sport or Sport Plus.

The resulting combination sounds unnatural, but because the car is so well isolated from outside noise, I found myself leaving the feature on most of the time to make it easier to hear when to shift. The M Mode button above Sound Control provides another layer of adjustability, altering the digital gauge cluster and heads-up display layouts to bring performance-related information front and center. However, glare often made these digital tachometer representations challenging to read at a glance.

But like great BMWs of the past, the M3 makes up for many of its shortcomings with a brilliant chassis. Additional structural bracing throughout the car makes it significantly more rigid than a standard 3-Series, allowing the suspension to do its work more efficiently and utilize all of the available grip from the Michelin Pilot Sport 4S summer tires. The M3’s variable-ratio steering rack is light regardless of whether it’s set to Comfort or Sport, and it’s a bit too quick for its own good at times, but the front end is so pinned down that the M3 rarely feels out of sorts when being tossed around.

The optional M Carbon Ceramic brakes provide excellent, fade-free stopping power, but they also add $8,150 to the bottom line. If you plan to do any track days, I’d recommend sticking with the standard brakes and switching over to a more aggressive pad. The M3 also has Comfort and Sport brake settings here thanks to its brake-by-wire system, but I couldn’t detect a difference between the two.

The M3 has always aimed to be the performance car for all occasions, and BMW’s latest entry succeeds in that pursuit on several different fronts. But in its mission to be all things to all people, the new M3 has also ushered in a pervasive sense that the car’s various systems need too much of the driver’s attention and adjustment. This complaint is not enough to derail the overall experience, and to be fair, some complexity is unavoidable when you’re designing a vehicle to switch between regular use and track use at a moment’s notice. Still, it’s hard not to interpret the M3’s convolution—as well as its polarizing design—as part of a larger issue of BMW not knowing where to draw the line.