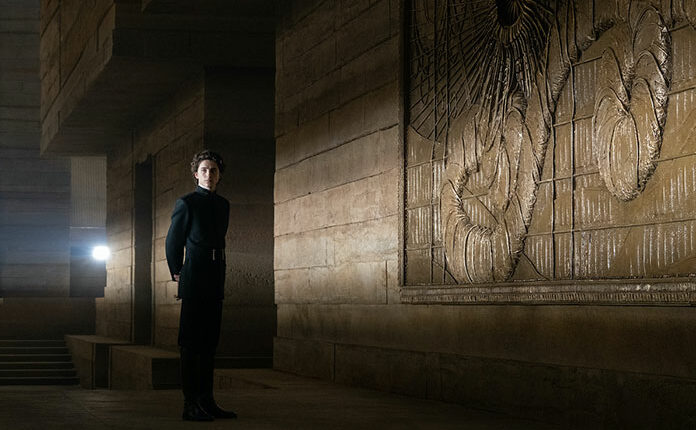 One thing is for sure though, the reviews all indicate the adaptation is massive in both scale and scope and is a full artistic work as opposed to a more crowd-pleasing commercial play.

With 27 reviews counted, the film stands at a strong 85% on Rotten Tomatoes, and boasts a stellar 8.4/10 average rating. Here’s a sampling of reviews from various critics:

“To call this ‘Dune’ a remarkably lucid work is to praise it with very faint damnation… Villeneuve has ironed out many of the novel’s convolutions, to the likely benefit of comprehension but at the expense of some rich, imaginative excess. As a visual and visceral experience, ‘Dune’ is undeniably transporting. As a spectacle for the mind and heart, it never quite leaves Earth behind.” – Justin Chang, The LA Times

“Dune reminds us what a Hollywood blockbuster can be. Implicitly, its message written again and again in the sand, Denis Villeneuve’s fantasy epic tells us that big-budget spectaculars don’t have to be dumb or hyperactive, that it’s possible to allow the odd quiet passage amid the explosions. [It’s a] dense, moody and quite often sublime – the missing link bridging the multiplex and the arthouse” – Xan Brooks, The Guardian

“Villeneuve’s “Dune” is both dazzling and frustrating, often spectacular and often slow. It’s huge and loud and impressive but it can also be humorless and bleak – though on the whole, it tries valiantly to address the problems of taking on Herbert’s complex epic… [It’s] a formidable cinematic accomplishment, a giant mood piece that can be exhilarating in its dark beauty.” – Steve Pond, The Wrap

“It is a film of such literal and emotional largeness that it overwhelms the senses. If all goes well, it should reinvigorate the book’s legacy in the same way Peter Jackson’s Lord of the Rings trilogy did for JRR Tolkien’s work. 5/5” – Clarisse Loughery, The Independent

“The first good adaptation of Herbert’s psychedelic (and frequently opaque) musings comes at a moment where visual grandeur is in desperate need of something weird and thoughtful. Well, Dune is very weird. Blissfully so.” – David Crow, Den of Geek

“Villenueve can’t help but lacquer it all up into something hyper polished and hard to the touch… He’s an overloader, and only the keenest and most urgent of scripts can survive beneath that weight. Villeneuve’s film is somehow plodding and hurried at once, flurries of exposition and table-setting ringing around set-piece monoliths” – Richard Lawson, Vanity Fair

“[Villeneuve], working with amazing technicians, manages to walk the thin line between grandeur and pomposity… You will read other reviews complaining about how hard to follow this is. It’s not, if you pay attention… the movie is rife with cinematic allusions, mostly to pictures in the tradition of High Cinematic Spectacle.” – Glenn Kenny, RogerEbert.com

“‘Dune’ has no lack of cinematic spectacle… it also benefits from a charismatic ensemble… But it doesn’t quash the frequent claim that the book is unfilmable. At least not in part one of what is being billed as a two-part saga… Villeneuve’s film at least gets closer to the elusive goal than its predecessors. What the film doesn’t do is shape Herbert’s intricate world-building into satisfyingly digestible form.” – David Rooney, THR

“Dune is a galactic crowd-pleaser on a vast scale. Such pseudo-spiritual sci-fi adventures often teeter on the edge of the ridiculous, but Dune mostly stays on the right side of risible.” – Raphael Abraham, Financial Times

“For all of Villeneuve’s awe-inducing vision, he loses sight of why Frank Herbert’s foundational sci-fi opus is worthy of this epic spectacle in the first place. Such are the pitfalls of making a movie so large that not even its director can see around the sets.” – David Ehrlich, Indiewire

“Dune” is set to open both in U.S. cinemas and on HBO Max on October 22nd.