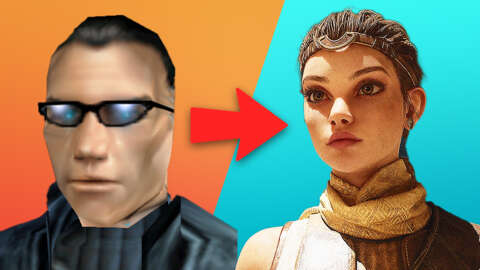 Let’s take a trip down memory lane to see how far the game development technology has come. Get a glimpse of how the Unreal Engine has evolved from its first iteration all the way to its fifth iteration.

Throughout its history, the Unreal Engine has maintained itself as one of the most popular development tools in the games industry. From its early days in the mid 90s, to its powerhouse performance as a games and film visual creation engine, the Unreal Engine has powered many of the most iconic video games over the course of nearly three decades–which includes Gears of War, BioShock, and Fortnite.

In this video, we’re taking a look at the evolution of Epic Games’ tech. Starting with 1996’s Unreal Engine 1 tech demo, we look at how Epic Games’ early tech revolutionized the rendering of 3D environments. Then after, we go over how Unreal Engine 2 took things further by adding improved lighting, detailed character animations, and a greater sense of depth in 3D spaces. From there, the video continues on, from Unreal Engine 3 all the way to the current day where we’re now still awaiting the upcoming release of Unreal Engine 5, which adds more realistic visuals and lighting.

Along with this look back at the advances to the Unreal Engine, we’ve also published an extensive video on the evolution of PlayStation consoles. For more information on what’s to come with the Unreal Engine 5, be sure to check back with GameSpot for more details.