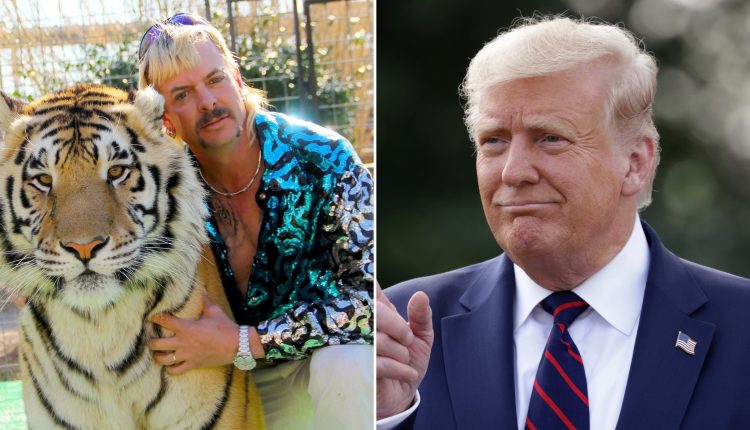 Joe Exotic is ‘praying to God’ that Donald Trump will pardon him next week before his time in office is up.

The Tiger King star, who is currently serving 22 years in prison for animal abuse and a murder for hire plot against Carole Baskin, has been seeking clemency for President will grant him clemency alongside the likes of his son Donald Junior.

‘I pray to God that Trump has me on that list for the 19th right next to Don Jr and thousands of others,’ Exotic wrote on Twitter.

‘There is a new line of evidence coming this week to show the corruption in the DOJ.’

Last week, it was reported that Exotic’s legal team were pushing for the pardon to be sped up following the death of his father Francis Schreibvogel, who died from coronavirus complications.

It has been claimed that Trump may look to pardon a number of people as a way of distracting from the vote.

Last year, the US leader told a press conference that he would ‘look into it’ when asked whether he’ll pardon Exotic.

Carole previously asked Trump not to release Exotic, who is currently due for release in 2037.

She told Channel Seven’s The Morning Show in Australia: ‘I can’t believe that would be a good move for anybody’s political career – given the fact that he was convicted for two counts of murder for hire and 17 counts of wildlife trafficking and abuse, which included shooting five healthy tigers in the head to make room for some circus cats he wanted.’

Tiger King is available to stream on Netflix.