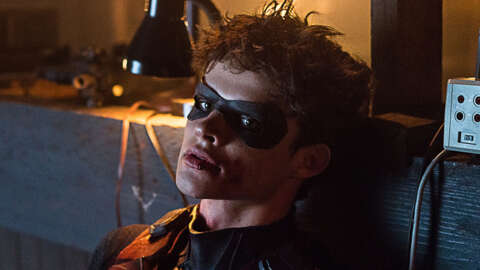 The first look at Season 3 of the HBO Max original series Titans, the live-action take on the Teen Titans comic book series, has arrived and things look dire. The third season of the show, which premieres August 12 on HBO Max, is largely set in Gotham City and, based on this short teaser, The Joker might be on his way.

In the clip, Jason Todd is in his Robin suit when he finds a dead person with a permanent smile plastered on their face as a maniacal laugh is heard. Clearly, this is hinting at Joker, though there’s been no confirmation that the clown prince of crime will actually pop up on the show. Interestingly, though, we also see someone being beaten with a crowbar–and a later show of a blood-soaked crowbar.

This definitely hints at the death of Jason Todd, who was tortured and beaten to death by Joker in the comics. Still, even though the trailer is implying we’ll see that in Season 3 of Titans, it’s already been revealed that Jason will take on the Red Hood persona in the next batch of episodes, which in the comics is the mantle he takes on following his resurrection. It doesn’t seem like Titans will be following that particular chain of events, however, so whether or not Jason is actually slated for the chopping block or just a really bad (but ultimately nonfatal) time remains to be seen.

Whatever happens, Titans continues to be the bleakest corner of the DC TV universe. Now we just need details on another season of Doom Patrol and all will be right in the world.

How Damhnait Doyle and a crew of N.L. musicians lent their talents to video game played by millions