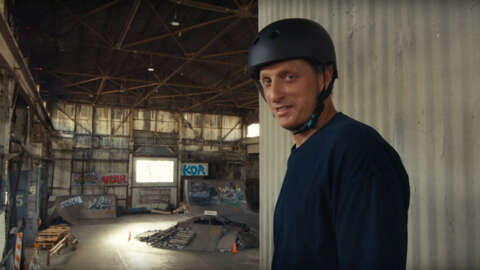 Tony Hawk Covers The Best Song From His Own Game

When you think of Tony Hawk, who you may have almost recognized at the airport, his many games’ incredible soundtracks probably come to mind. The Birdman is a big fan of the punk rock included in those early games, and he covered one of their best songs with some help from his famous friends. And no, that song is not “Superman.”

The song is “No Cigar” by Millencolin, featured in the Tony Hawk’s Pro Skater 2 (sorry, we previously said it was the first game) as well as the Tony Hawk’s Pro Skater 1 + 2 remake released in 2020. Hawk himself takes lead vocal duties as he skates down the street, with Millencolin lead singer and bassist Nikola Sarcevic taking on background vocal duties. Darrin Pfeiffer, formerly of Goldfinger and currently touring with Punk Rock Karoake, is behind the kit, and pro skater Steve Caballero and Mikey Hawdon both share guitar duty.

The video itself is edited to resemble a video game, with scores and ranks going up over the course of the song. If only it could have been filmed in the Warehouse, which is a real place, it would have been perfect.

You may be surprised by just how well Tony Hawk can belt out the tune, which features some pretty high notes in the chorus and bridge, but this isn’t even the first time he’s done a video like this. He recorded a cover of The Jam’s “In the City” for Punk Rock Karoake earlier this year, and we knew he had some pipes.

As for the game series, it isn’t clear if we’ll get any more Tony Hawk titles anytime soon. Though the remake was well-received, developer Vicarious Visions was absorbed into Blizzard recently. Blizzard and parent company Activision Blizzard find themselves at the center of controversy and a lawsuit that alleges widespread harassment as well as discrimination against women.