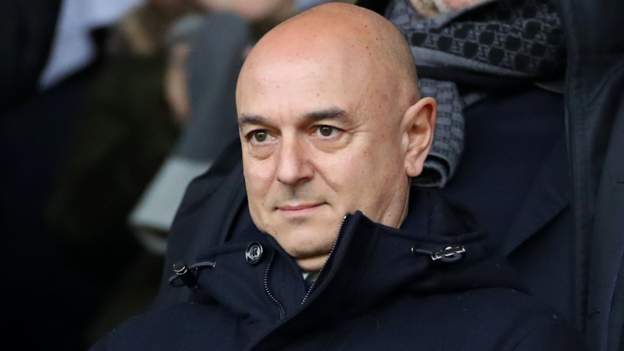 Daniel Levy has been Tottenham chairman for 20 yearsTottenham Hotspur chairman Daniel Levy says the club “lost sight of some key priorities” during construction of the new stadium and the Covid-19 pandemic.

Spurs, who reached the 2019 Champions League final, are sixth in the Premier League and battling simply to qualify for European competition next season.

They signed up to the European Super League before withdrawing as the project collapsed.

“We have not met our raised expectations on the pitch,” said Levy.

“We have been so focused on delivering the stadium and dealing with the impact of the pandemic that I feel we lost sight of some key priorities and what’s truly in our DNA.

“We don’t get everything right. It has never been because we don’t care about or respect our fans – nothing could be further from the truth.”

Harry Kane – should he stay or should he go?Tottenham sacked Jose Mourinho as manager in April and appointed Ryan Mason as interim boss in the week leading up to their Carabao Cup final defeat by Manchester City.

They appointed Mourinho in November 2019 to replace Mauricio Pochettino, whose Spurs side lost to Liverpool in the Champions League final earlier that year.

“Since we lost the Champions League final in June 2019 we have invested in excess of £250m in new players,” said Levy, prior to Tottenham playing Aston Villa on Wednesday.

“Everyone had high hopes with the squad we had assembled. Unfortunately, despite sitting top of the Premier League in December, we have not been able to sustain this position.”

“We reached the Carabao Cup final, however we had a disappointing exit from the Europa League and now find ourselves fighting to qualify for Europe, having competed in European competition for 14 of the last 15 seasons.”

Spurs striker Harry Kane has reportedly told the club he wants to leaveexternal-link but Levy says “that central to our ambitions is a successful football team” as the club “focus” on appointing a new manager.

“We are acutely aware of the need to select someone whose values reflect those of our great club and return to playing football with the style for which we are known – free-flowing, attacking and entertaining,” added Levy.

WNBA’s Napheesa Collier: How to be Outspoken about Race at Work