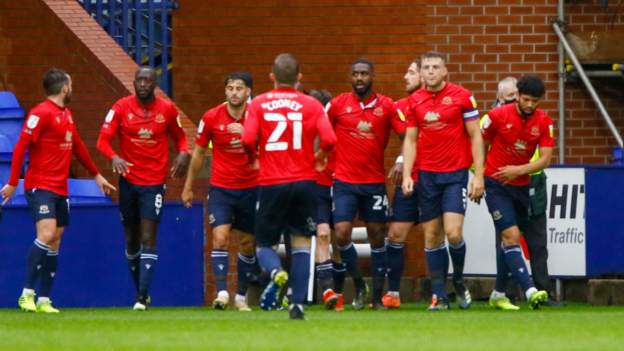 Liam McAlinden’s winner was just his third goal for Morecambe this seasonMorecambe edged out Tranmere Rovers in the first leg of their League Two play-off semi-final at Prenton Park.

Nathaniel Knight-Percival deflected home Liam McAlinden’s cross to put the visitors ahead in the 15th minute.

But McAlinden was on hand to touch in Cole Stockton’s ball across the face of goal on the stroke of half-time to restore Morecambe’s one-goal advantage.

Shrimps silence home supportMorecambe, who are looking to reach the third tier for the first time in their history, missed out on automatic promotion by a single point this term.

But in an entertaining tie Derek Adams’ side got off to the perfect start, silencing 3,000 home supporters as Knight-Percival opened the scoring with his first goal for the club.

And after absorbing plenty of Tranmere pressure, former Rover Stockton latched on to a loose ball before squaring to McAlinden, who tapped home in first-half stoppage time.

Morecambe will take a one-goal lead to Mazuma Stadium when the sides meet again in the second leg on Sunday (12:30 BST).

Tranmere fans returned to Prenton Park for the first time since December 2020There will be a feeling of what might have been for Tranmere, who dominated proceedings on a windy night on the Wirral.

Caretaker boss Ian Dawes was at the helm following the sacking of manager Keith Hill three days after the end of the regular season.

And Rovers, who won just two of their final 11 games, looked a team transformed, regularly carving out openings.

Centre-back Manny Monthe had the best of the second-half chances, his header being tipped away by Morecambe keeper Kyle Letheren in the 75th minute, before Danny Lloyd fired wide in the closing stages.

‘We dealt with their threats’ – reactionTranmere caretaker manager Ian Dawes:

“We’re still in the tie of course, but we do have to defend set-plays better in the second half.

“We just needed to step it up a bit at times, while Morecambe stagnated the game when they needed to.

“The mentality was good from our lads, but that second goal did come at a really bad time for us.”

“We’re obviously delighted to get the win away from home, it was never going to be easy here.

“Tranmere have changed their manager, they had almost 4,000 fans in here tonight and it’s a difficult venue to come to anyway.

“They started the game really well, as we expected they would, but we dealt with that threat so well.”

Attempt missed. Danny Lloyd (Tranmere Rovers) left footed shot from the centre of the box misses to the left.

Lee O’Connor (Tranmere Rovers) wins a free kick in the defensive half.

Brad Lyons (Morecambe) is shown the yellow card for a bad foul.

Kaiyne Woolery (Tranmere Rovers) wins a free kick in the defensive half.

Attempt missed. David Nugent (Tranmere Rovers) header from the left side of the box is high and wide to the left. Assisted by Jay Spearing.

Danny Lloyd (Tranmere Rovers) is shown the yellow card for a bad foul.

Ryan Cooney (Morecambe) wins a free kick in the defensive half.

Attempt missed. Peter Clarke (Tranmere Rovers) left footed shot from outside the box is high and wide to the left. Assisted by Jay Spearing.

Red Bull: Mercedes trying to pressure us with ‘favourite’ tag