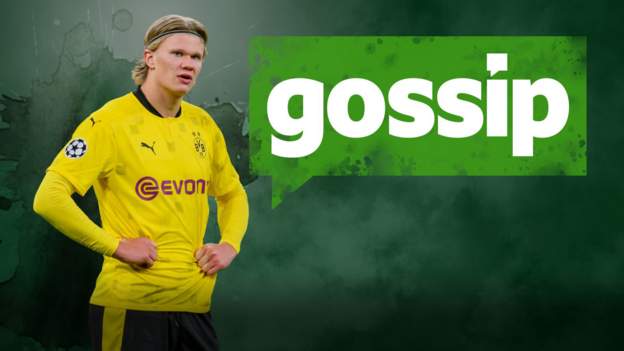 Barcelona and Real Madrid may be priced out of a deal for Borussia Dortmund and Norway striker Erling Braut Haaland. The 20-year-old wants a salary of 35m euros (£30m) a year. (Goal)external-link

Manchester United are ready to step up their interest in Fiorentina and Serbia defender Nikola Milenkovic, but the Italian side want at least £38m for the 23-year-old. (Sun)external-link

Paris St-Germain are putting pressure on Kylian Mbappe to sign a new deal, but the France forward, 22, does not want the contract to be too long. (L’Equipe – in French)external-link

Everton manager Carlo Ancelotti says the club are “open” to selling 21-year-old Italy striker Moise Kean, who is on loan at PSG. (Mail)external-link

Real Madrid are not prepared to sell 22-year-old Norway midfielder Martin Odegaard, who is on loan at Arsenal until the end of the season. (Marca)external-link

West Ham are hopeful they will be able to sign Arsenal and England Under-21 striker Eddie Nketiah, 21, this summer. (Evening Standard)external-link

Wolves will try to sign Benfica’s Brazilian forward Carlos Vinicius this summer after Tottenham chose not to make the 26-year-old’s loan permanent. (TVI24 – in Portuguese)external-link

Manchester United and Arsenal have been linked with France’s 18-year-old midfielder Eduardo Camavinga, who has decided not to extend his contract at Rennes. (Marca)external-link

Manchester United want to sign 24-year-old Fulham and Denmark defender Joachim Andersen, who is on loan at Craven Cottage from Lyon. (B.T – in Danish)external-link

Bayern Munich are considering Massimiliano Allegri as manager Hansi Flick’s potential replacement. Allegri has been without a role since leaving Juventus in 2019. (Sport Mediaset – in Italian)external-link

Sassuolo and Italy midfielder Manuel Locatelli says he would consider a move abroad. The 23-year-old has been linked with Manchester City. (Corriere dello Sport – in Italian)external-link

Watford are set to offer former winger Ashley Young, 35, a one-year deal if they are promoted back to the Premier League. The English player’s contract at Inter Milan runs out this summer. (Mail)external-link

Barcelona are considering a move for RB Leipzig and Spain striker Dani Olmo, 22, who played at the Catalan club’s academy. (Sport)external-link

Atletico Madrid are interested in 19-year-old Italian midfielder Nicolo Rovella, who is on loan at Genoa from Juventus, plus Udinese’s Argentine right-back Nahuel Molina, 23. (Mundo Deportivo – in Spanish)external-link

The back page of Friday’s Mirror

Should we eat bacteria?: One simple thing that could improve your life!Summer drinks have come early: Top tips for taking your cocktails outside