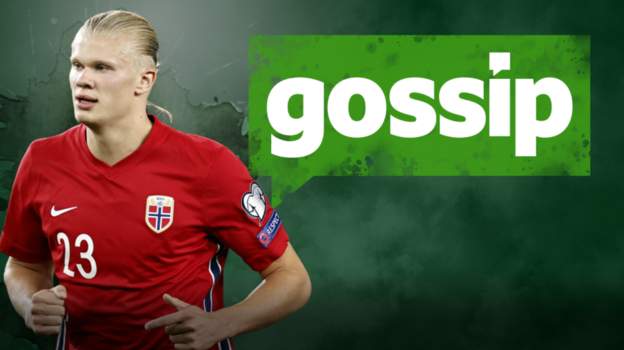 Barcelona will try to sign Spain midfielder Dani Olmo, 23, again in January after a deadline-day £50m bid was rejected by RB Leipzig. (Mail)external-link

There was never any chance of Barca signing Portugal forward Joao Felix, 22 from Atletico Madrid, despite Frenchman Antoine Griezmann, 30, heading back to the club. (Fabrizio Romano)external-link

Tottenham boss Nuno Espirito Santo assured new signing Emerson Royal, 22, that he would play a key role in the team, before the Brazilian defender agreed to leave Barcelona. (Marca)external-link

Manchester United, Liverpool and Arsenal are set to battle for 25-year-old Brighton and Mali midfielder Yves Bissouma in January. (Mirror)external-link

The relationship between Newcastle boss Steve Bruce and owner Mike Ashley is at its lowest ebb after a disappointing transfer deadline day, which saw the Magpies miss out on key loan target, Leicester and England U21 midfielder Hamza Choudhury. (Telegraph)external-link

Arsenal’s Norwegian midfielder Martin Odegaard, 22, who signed for the club from Real Madrid this summer, says he does not like seeing Amazon’s cameras around the club. The Gunners are the latest team to be the subject of an All or Nothing documentary. (Mail)external-link

The Gunners are beginning to regret the £72m signing of Nicolas Pepe, 26, from Lille in 2019 after the Ivory Coast international’s disappointing start to the season. (Mirror)external-link

Barcelona are set to offer France winger Ousmane Dembele, 24, a new contract. He is currently recovering from a hamstring problem. (RAC via Goal)external-link

Chelsea’s 22-year-old French defender Malang Sarr has been left in limbo after his loan move to Bundesliga side Greuther Furth collapsed on deadline day. (Mail)external-link

The Star back page

FA Cup: Nathan Cartman on choosing not to take his own life and asking for help