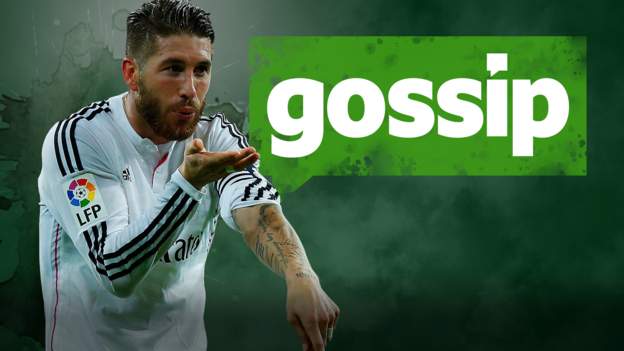 Paris St-Germain, Manchester City, Manchester United and Sevilla are the four possible destinations for outgoing Real Madrid captain Sergio Ramos. The 35-year-old Spanish defender, who began his career at Sevilla, is set to leave Real after 16 years at the club having failed to agree a contract extension. (AS – in Spanish)external-link

Brighton have rejected a £40m bid from Arsenal for 23-year-old England defender Ben White. The centre-back made 36 Premier League appearances for Brighton last season and earned England call-up in May. (Sky Sports)external-link

Arsenal have backed out of a move for Norway international Martin Odegaard, 22, with the midfielder determined to stay at Real Madrid after spending the second half of last season on loan at the Emirates. (AS – in Spanish)external-link

Leicester and England midfielder James Maddison has emerged as Arsenal’s top transfer target this summer but a bid of £70m for the 24-year-old has been turned down by the Foxes. (Express)external-link

Former Manchester United attacker Memphis Depay, 27, who is out of contract at Lyon, looks set for a move to Barcelona and a reunion with Dutch compatriot Ronald Koeman. (Sun)external-link

France winger Kingsley Coman, 25, wants a move to the Premier League after turning down a new contract at Bayern Munich. (Sky Sports)external-link

Napoli have made Chelsea’s Italian left back Emerson Palmieri their leading target but the clubs are both haggling over the Stamford Bridge club’s 15m euro (£12.85m) estimation for the 26-year-old. (Gazzetta Dello Sport – in Italian)external-link

Inter Milan are set to rival Everton in the race to sign Netherlands defender Denzel Dumfries, 25, from PSV Eindhoven. (Voetbal International – in Dutch)external-link

Brighton have agreed a club record £25m fee with Stuttgart for Argentina forward Nicolas Gonzalez, 23, who scored six goals in 15 appearances during the 2020-21 Bundesliga campaign. (Guardian)external-link

Tottenham are interested in signing Brighton and England U21 right-back Tariq Lamptey, 20, who impressed for Graham Potter’s side last term before suffering a season-ending hamstring injury in December. (Sky Sports)external-link

The Seagulls are also in talks with 30-year-old former England striker Danny Welbeck over a new contract. (The Argus)external-link

England striker Harry Kane’s hopes of a move from Tottenham to Premier League champions Manchester City have been complicated by the two clubs being drawn to play each other in the opening round of the 2021-22 Premier League campaign. (The Telegraph – subscription required)external-link

Sheffield United could be forced to accept Arsenal’s proposed deal for Norwegian midfielder Sander Berge. The 23-year-old has said he hopes to play Champions League football next season. (Sheffield Star)external-link

Leeds have not given up hope of persuading Ezgjan Alioski, 29, to stay at Elland Road. The Macedonian winger has been expected to leave the club on a free transfer this summer as he has been unable to agree new terms with, and appeared to say goodbye on the final day of last season. (Mirror)external-link

Crystal Palace are hoping to hold talks with former Borussia Dortmund boss Lucien Favre as they continue their search for a new manager. (Sun)external-link

Manchester United have had their opening bid for full-back Kieran Trippier turned down by Atletico Madrid. La Liga’s champions want close to £35m for the 30-year-old Englishman. (Guardian)external-link