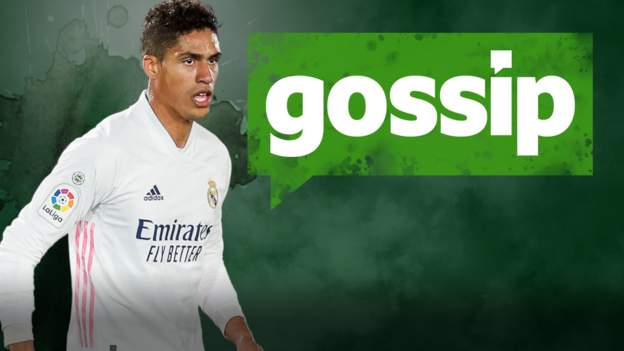 Chelsea will look to sign Poland striker Robert Lewandowski from Bayern Munich in a £50m deal – although the German champions want the 32-year-old to sign an extension to his current deal, which runs until 2023. (Sun)external-link

Arsenal hope to complete the £18m signing of Anderlecht midfielder Albert Sambi Lokonga in time for the 23-year-old Belgian to fly out with the team for pre-season training in Florida on Wednesday. (Mail)external-link

Chelsea midfielder Conor Gallagher will be allowed to go out on loan this season with Crystal Palace and Newcastle United both interested in the 21-year-old Englishman. (Sun)external-link

Manchester United are expected to make a formal offer for Real Madrid defender Raphael Varane, 28, this week, but are not prepared to meet the £50m price tag for a player who has one year left on his contract. (Daily Mail)external-link

France centre-back Varane is in high demand, with Chelsea considering joining United and Paris St-Germain in the race to sign him. (Marca – in Spanish)external-link

Manchester United have also been offered the chance to sign Real Madrid’s Brazil winger Vinicius Junior, 21, as the Spanish side try to raise funds before making a move for Paris St-Germain’s France forward Kylian Mbappe. (Mirror)external-link

Harry Kane’s England team-mates believe the 27-year-old may not attend Tottenham pre-season training in a bid to force a move to Manchester City this summer. (The Telegraph – subscription required)external-link

Tottenham want to sign Roma’s Lorenzo Pellegrini, 25, although it is unclear whether or not the Italy attacking midfielder would be keen on a move to England. (Gazzetta dello Sport via Sport Witness)external-link

Fenerbahce are in talks with West Ham United over a £2m deal for the Hammers’ 31-year-old Ukraine winger Andriy Yarmolenko. (Football Insider)external-link

England midfielder Jordan Henderson, 31, is set to sign a new deal with Liverpool. The Reds captain’s current deal at Anfield runs until 2023. (Mirror)external-link

Brazil left-back Alex Telles has played down talk that he could leave Manchester United this summer by saying it is “a pleasure to be at” Old Trafford. The 28-year-old, who joined United from Porto last year, has been linked with Roma and Inter Milan. (Goal)external-link

Romelu Lukaku’s agent Federico Pastorello has assured Inter Milan fans that the Belgian striker, 28, will not leave the San Siro this summer despite financial issues at the Serie A champions. (FCInterNews – in Italian)external-link

Mauro Icardi is open to leaving Paris St-Germain for Juventus this summer. The Argentina striker, 28, spent seven years in Serie A with Inter Milan before joining the French side in 2019. (Footmercato – in French)external-link

Juventus have also expressed interest in re-signing Bosnia midfielder Miralem Pjanic, who has struggled for game time since joining Barcelona from the Italian giants in 2020. (Mundo Deportivo – in Spanish)external-link

Liverpool may have to move quickly if they are to beat Borussia Dortmund to the signing of PSV Eindhoven forward Donyell Malen. In order to buy the 22-year-old Netherlands striker, Jurgen Klopp would first have to offload fringe players from the squad. (Daily Express) external-link

While Brexit might boost United’s transfer hopes, Gareth Bale, 32, faces an uncertain future after his loan spell at Tottenham Hotspur ended, as Real Madrid are only permitted to have three non-European Union players in their squad in line with La Liga regulations. (Mirror) external-link

Were Trippier to join United, Atletico Madrid will move for Norwich and England Under-21 full-back Max Aarons, who may cost the Spanish champions about £25m. (Mirror)external-link

Barcelona midfielder Riqui Puig has rejected several offers with the 21-year-old Spaniard determined to stay and fight for his place at the Nou Camp under Ronald Koeman. (Sport – in Spanish)external-link

How to be a teenager and an elite athlete: Hear from one of the youngest participants at Tokyo 2020Have You Heard George’s Podcast?: George the Poet is back with season three of his award-winning podcast