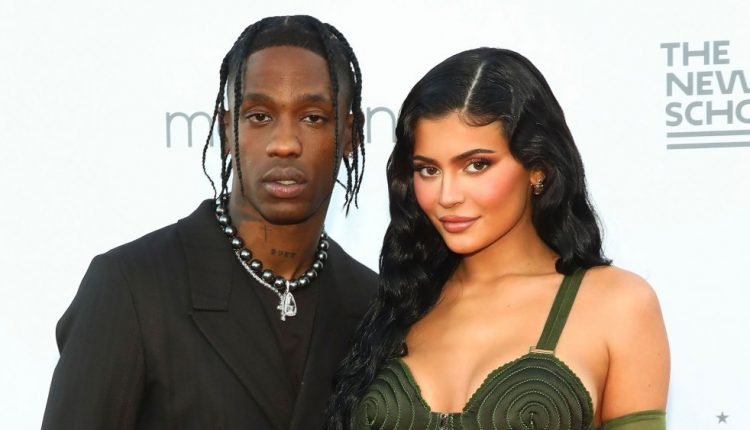 A family affair! Travis Scott had some sweet words to share about Kylie Jenner and their daughter, Stormi, 3, after the trio walked the red carpet at the 72nd annual Parsons Benefit in New York City on Tuesday, June 15.

“Stormi, I love you, and wifey, I love you,” the “Sicko Mode” rapper, 30, said while accepting an award at the gala, according to E!.

Jenner, 23, shared some clips from the evening to TikTok after the event, captioning the post, “24 hours in NYC.” The video, which was set to Scott’s “Butterfly Effect,” showed the Kylie Cosmetics owner getting ready for the evening, posing on the red carpet and holding hands with her daughter. She also included a close-up of the Cactus Jack founder’s diamond necklaces and a snippet of his speech.

At the event — the first red carpet the family has appeared at since Travis and Jenner split two years ago — the youngest Kardashian-Jenner sibling wore a vintage olive-green Jean Paul Gaultier dress. Her on-again off-again beau looked chic in a suit, while their daughter rocked a black shift dress.

The family’s shoe selection was on point as well. Scott kept it classic with shiny black dress shoes as his girls took the spotlight: Jenner wore clear heels while Stormi stole the show with tiny Nike sneakers.

The Keeping Up With the Kardashians star and the Cacti Seltzer owner started dating in April 2017. Five months later, Us Weekly confirmed that Jenner was expecting their first child. While the pair split in October 2019, they’ve remained in each other’s lives in a big way.

Last month, a source told Us exclusively about Scott and Jenner’s unconventional relationship.

“I wouldn’t say that Kylie and Travis have an open relationship, they just don’t put a label on it. They’ve been like this for years,” the insider shared. “Travis will be at all holidays, everything to do with Stormi, but he and Kylie don’t call each other boyfriend and girlfriend. There’s no expectations between them. There are no requirements in their relationship, it’s the way it’s always been.”

Regardless of labels, the pair’s connection is strong.

“They don’t call each other asking where they are, Kylie and Travis are both allowed to do whatever they want, but they have a huge amount of love for each other,” the source added. “It’s not a traditional relationship, but it works for them and has worked for years.”

Scroll to see photos from the family’s night on the town:

Alexa and Carlos PenaVega Don’t Have ‘Any Help’ Raising 3 Kids: We ‘Wish’

What Are the ‘Twisties’? Simon Biles Avoided Injury With Olympics Withdraw

LPBW’s Tori Roloff Tearfully Reflects on Finding Out About Miscarriage

Why Kailyn Lowry Is Freezing Her Eggs: ‘I Just Want the Possibility’

Lindsie Chrisley and Will Campbell Split After 9 Years of Marriage

Kelly Clarkson and Brandon Blackstock’s Divorce: Everything We Know

Michael A. Gets Real About the ‘Pain’ of Katie Split:…