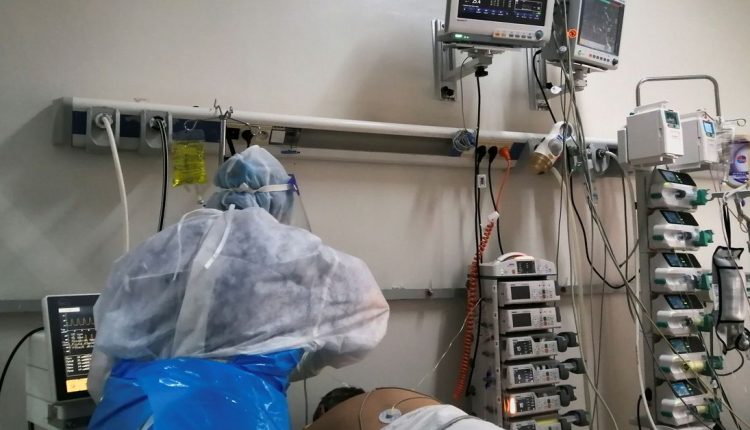 A medical staff member assists a patient suffering from the coronavirus disease (COVID-19), at an intensive care department at a hospital in Ariana, Tunisia, April 26, 2021. REUTERS/Jihed Abidellaoui

The medics at Abderahmen Mami hospital in Tunis are part of a health system pushed to its limit, with intensive care wards filled by a new surge in COVID-19 cases that has outstripped a vaccination campaign limited by short supplies.

Last week one of the government’s scientific advisers warned the health system was on the brink of collapse, with between 90-110 new patients in need of hospitalisation each day. Tunisia has only about 500 intensive care beds.

Dressed in a full protective suit, with only the band of her face between her mask and hair cap exposed, nurse Soumaya Ben Dhabou said the demand for oxygen and intensive care treatment was growing.

“The beds we have are full and we do not have vacancies,” Ben Dhabou added.

She and other medics at Abderahmen Mami, in the capital’s Ariana district, were working flat out this week, tending to intubated patients in its 20 intensive care beds, their chests slowly rising and falling to the backdrop of beeping machines.

Jalila Ben Khalil, a member of the government’s scientific committee, who last week warned of a collapse in Tunisia’s healthcare system, said the state should declare a health emergency and implement new measures.

The government this month closed schools and put car traffic under a 7pm curfew, while leaving the overall curfew of 10pm unchanged, though more restrictions have been discussed.

When the global pandemic hit last year, the government locked down the country for two months, delaying the arrival of a COVID-19 surge until the autumn but at a heavy cost for a poor, indebted economy.

As the latest wave has overwhelmed hospitals, the profile of patients is younger and includes more of those without chronic diseases, Ben Dhabou said. “After a year of fighting the virus, the medical and paramedical staff are exhausted,” she added.

Tunisia is receiving vaccinations through the World Health Organisation’s COVAX scheme, but the rate of delivery is slow. At a vaccination centre this week, elderly people sat waiting for their jab.

About 300,000 people have been vaccinated so far from the total population of 12 million, with about 13,000 jabs administered each day.

How to Create a Successful Virtual Internship Program