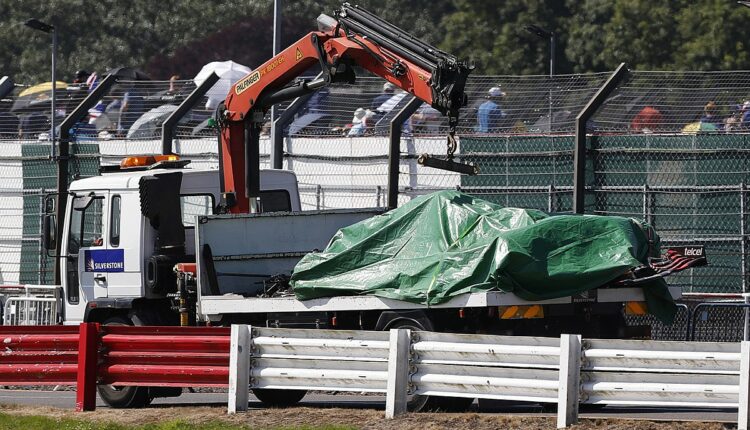 The Red Bull driver was pitched into the barriers at Copse corner on the opening lap after he collided with title rival Lewis Hamilton.

Hamilton had got a run down the inside of Verstappen on the run in to the high-speed right hander, but his Dutch rival held his ground around the outside.

Verstappen’s car was spun around after clipping Hamilton’s left front. His right rear tyre popped off the wheel in the incident, and he slammed hard into the tyre barriers. Red Bull estimated that the impact was as high as 51G.

While Verstappen was able to climb out of his badly damaged car by himself, he looked clearly shaken up by the smash as he was attended to by marshals.

He was able to walk to an ambulance before being taken to the Silverstone circuit’s medical centre for checks. Following an early analysis by doctors, it was decided that he needed further in-depth medical checks, so it was decided he be taken to hospital.

A statement issued by his Red Bull team said: “Following an assessment by the trackside doctors at Silverstone Circuit Medical Centre, Max Verstappen has been taken to a local hospital for further precautionary tests. Further updates will follow in due course.”

Verstappen’s father Jos Verstappen said his son had felt light-headed after the crash, and was suffering some shoulder pain.

Speaking to Ziggo Sport, he said: “He [Max] felt a bit light-headed and will now go to the hospital for a CT scan. Otherwise, he was okay. He also had a bit of pain in his shoulder and was a bit bruised all over. But yeah, it sucks…”

Verstappen said he had looked at video replays of the crash with his son and both agreed that Hamilton had been left enough room.

“I looked at the incident with Max to see exactly what happened,” added Verstappen. “Max said ‘I gave him enough space and I was already half in front of him. He just drove his front wheel into my rear wheel. Then you know that you are wrong.’

“And if you only get a 10 seconds time penalty for that, I think it’s ridiculous … Especially in a corner like that, it’s just not right.”

UPDATE: On Sunday evening Verstappen tweeted that he’d been given the all-clear in hospital: