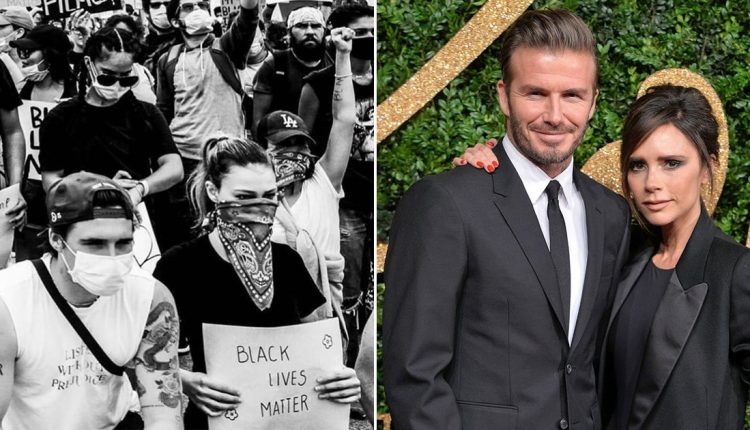 Demonstrations in support of the anti-racism movement have been sparked across the US and the rest of the world, following the death of George Floyd in Minneapolis.

Mainstream conversations speaking out against systemic racism have been taking place, with many calling for an end to police brutality.

Wanting to play his part, Brooklyn, 21, attended a protest held in New York with his model girlfriend Nicola and Victoria revealed on Instagram that she was ‘so proud’ of her son for taking a stand.

David shared his wife’s post to his Instagram story and added: ‘So proud of you @brooklynbeckham and @nicolaannepeltz.’

Brooklyn’s girlfriend Nicola replied to Victoria’s post and told the former Spice Girl that she misses her.

‘I love you and miss you so much,’ Nicola penned.

While Victoria and David have been isolating during the coronavirus lockdown at their Cotswold home in the UK with three of their kids, son Romeo, 17, Cruz, 15, and daughter Harper, eight, Brooklyn has been isolating over in the US in New York with Nicola.

Things are said to be going so well for the young couple while in quarantine, that they are thinking about permanently moving in together when restrictions lift.

Throughout lockdown, Victoria has been giving fans a glimpse into her home life, whether its working from home on her fashion empire to cooking with Harper in the kitchen.

She recently shared new books she has purchased for herself and Harper to read together that will help to educate them both on racism and racial injustices, as she revealed Harper has been asking questions amid the ongoing protests.

Victoria also called for the fashion industry to make changes in light of the current conversation surrounding Black Lives Matter in order to promote equality and change.

She wrote: ‘The fashion industry has a huge role to play in the Black Lives Matter movement, and I can be better. We can all be better. It starts with representation, both within our businesses and who we work with externally.’

Victoria revealed she has put together an internal working group within her eponymous brand to make sure everyone from their teams and talent to their model casting team, suppliers and partners are doing their bit.

The designer added that she will also be giving her staff further training in identifying unconscious bias.

Victoria said: ‘It’s each of our responsibilities to speak out and use our platforms for education, conversation and change. Things won’t change or be solved in a day, but we clearly can’t wait another day to start doing more.’