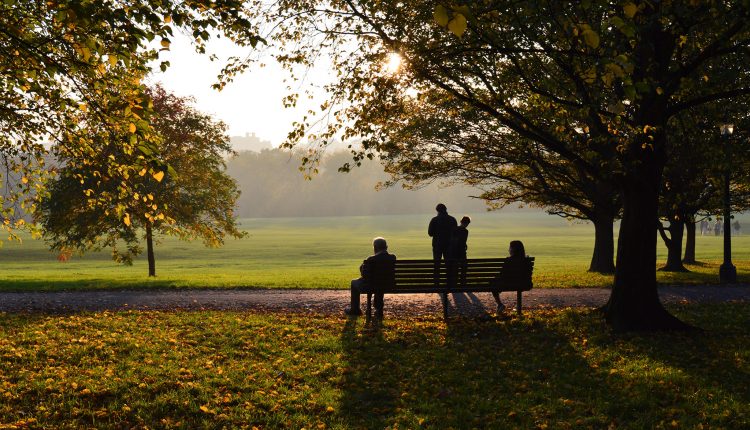 London just became the world’s first National Park City. In July 2019, officials signed the International Charter for National Park Cities–the culmination of a campaign spearheaded by National Geographic Explorer Daniel Raven-Ellison. The charter initiative was launched six years ago in an effort to make cities greener, healthier, and wilder, says Raven-Ellison, a geographer. (Read more about what this news means for the London environment.)
London’s population of nine million people live along 15,000 other species, such as eight types of bats hanging around nature reserves, deer roaming parks, and the largest population of stag beetles in England hiding in ancient forests. With almost as many trees in London as people, nearly half of the city is considered “green,” according to the Greenspaces Initiative for Greater London.” Of this green space, 33 percent consists of natural habitats within open space, and 14 percent vegetated private or domestic garden land.
Here are the eight best places for tourists and locals to enjoy the outdoors in the English capital.

Chiswick House Gardens
Located under the flight path of Heathrow Airport, the historic Chiswick House and its accompanying manicured gardens are notable for the presence of Atlantic blue cedar trees, some of which originated in Lebanon, and a canal running its length. The Beatles filmed several music videos here and, like many such open spaces in West London, there is a healthy population of London’s feral parakeets⁠—descendants, it’s believed, of domestic escapees⁠—whose occasional songs lend a tropical ambiance.

Almost half of London is covered in green space.

King’s Wood
Covering 147 acres in London’s Borough of Croydon, Kings Wood holds an ancient woodland. Evidence of Iron Age infrastructure has been found here; the wood was recorded in the Domesday Book of 1086; and has been roughly at its current size since Tudor times. Plundered for timber during the second World War, the intersecting “rides” of the wood⁠—a grid-like pattern of paths⁠—is a relic of when they were used for hunting. Today the woods are a little-known respite in the southern greenbelt of the city.

Abney Park Cemetery
A serene environment of tall trees brimming with biodiversity, Abney Park was originally a burial ground for dissenters from the established church—and the site wears its non-denominational heritage proudly. Closed to burial in 1970, the cemetery has since flourished as a semi-wild environment for rare birdlife, insects, and a notable variety of plants and fungi—many of which are rare in Britain, not only London.

Primrose Hill
One of medieval soothsayer Mother Shipton’s dark predictions concerned Primrose Hill, when she wrote that when London’s streets encroached the edges of the 200-foot high green dome, the city would run with blood. It would perhaps be a stretch to presume this was in recognition of the importance of green space in a city (Primrose Hill was well on the outskirts in those days) but today the eminence retains its slightly detached feel, despite being just north of central London. It has a protected view—one of six in London established in 1938 to allow perpetual sightlines to the city’s key landmarks—and it’s an expansive one, stretching over the aviaries of London Zoo to encompass the entire skyline of the capital.

Battersea Park
Ornate and inescapably human-crafted, it’s difficult to think of more varied use of green space in a city than the historic Battersea Park, covering 200 acres on the South Bank of the Thames, opposite Chelsea. Established in 1858 on marshland reclaimed from the river, the site is a patchwork of everything quintessential in a British park, from bowling greens and bandstands to playing fields and memorials. But they are woven into a varied landscape that also includes protected wild woodland, open spaces, and a beautiful lake complete with islands.

Epping Forest
Formerly a royal hunting forest—and notorious as the hideout of English outlaw Dick Turpin–Epping Forest today covers just under 6,000 acres lodged into northeast London, like a spear flung from neighboring Essex. Giving its name to a district, the forest proper is spread over roughly 16 deciduous miles, beginning on the edge of London’s Forest Gate. While patchy at its London end, the area contains impressive stretches of woods complete with ancient trees, numerous deer, and fungi colonizing the deadwood—as well as an important population of stag beetles, which (at up to three inches long) are Britain’s largest.

Lee Valley
London’s second river, the Lea, has suffered greatly since the urban and industrial expansion of the 19th century reclaimed the grassland habitat that once dominated its banks. Abused with industrial pollutants, today the ecological importance of the Lee (or Lea) Valley is being recognized and is the subject of rewilding projects intended to provide a toehold for species such as otters, voles, and waterfowl to re-establish the area’s biodiversity. This starts in the city itself—a fine example being the East India Dock Basin, a former cargo port which is now a wildlife preserve with saltmarsh meadows and wildflowers. The opening of the 26-mile ‘Leeway,’ a cross between a park and a path, provides a tranquil corridor through the postindustrial landscapes of East London into ever-rural environments.

Gunnersbury Triangle Nature Reserve
So called because of the shape it makes between intersecting train lines, the six-acre Gunnersbury Triangle was created in 1980 as a sanctuary for animals and invertebrates within the domestic bustle of West London. Managed by the London Wildlife Trust, this pocket of birch willow is an important habitat for sparrowhawks, newts, hedgehogs, and bats.

Simon Ingram is the online editor of
National Geographic Traveller UK, from which this article was adapted. Follow his travels on
Twitter.

What are Africa’s Big Five? Meet the continent’s most iconic wildlife

The ‘balance of nature’ is an enduring concept. But it’s wrong.