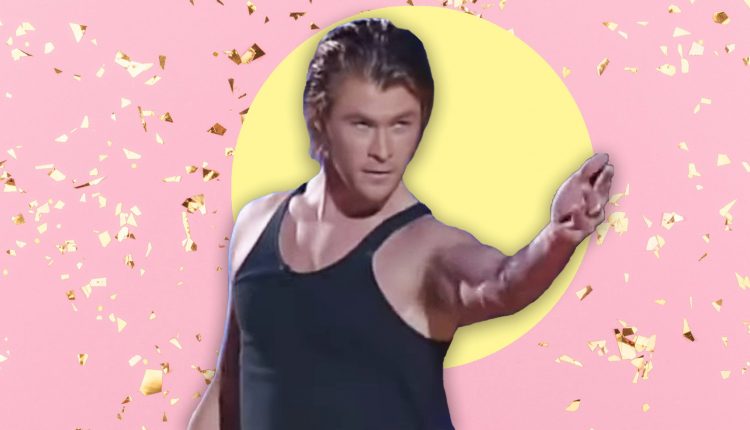 Chris Hemsworth is well known as the mighty Thor these days, however long before the Avengers star made friends with Mjolnir he appeared on the Australian version of Strictly, Dancing With The Stars, back in 2006.

The actor was a massive name down under (well, still is, to be fair) when he rose to fame playing Kim Hyde on Home and Away.

Capitalising on that intense soapie fame, the star signed up for the ballroom dancing show and, frankly, we are in awe of those hips. They do not lie.

This week a clip of the star re-emerged on social media as he danced to a slowed-down version of Jump in the Line (Shake, Senora) by Harry Belafonte, along with pro partner Abbey Ross (side note, he would go on to score 28 for that little number).

Now, we have to be honest, this is hardly the first time a clip of Chris showing off his moves on the Australian show has been unearthed over the years, but it would be downright negligent of us not to take a walk down memory lane as the moment was fawned over on social media overnight.

On Tuesday Kyle Buchanan shared the blessed video on Twitter, and wrote: ‘The thing about Chris Hemsworth competing on Australian Dancing With the Stars in 2006 is that it happened.’

Of course this prompted a massive response from people that ranged from reminiscing about his role on Home and Away, to remembering all the other massive stars who have appeared on the programme around the world over the years.

One rightly noted: ‘How are we not talking about this all the time? Also by the looks of this video, 2006 was…47 years ago.’

Another asked for Thor director Taika Waititi to work his magic for upcoming Marvel film Love and Thunder: ‘If @TaikaWaititi doesn’t put a recreation of this with Chunky Thor in Love and Thunder- I don’t even know what we’re doing here anymore.’

Taking the mick, one fan joked that perhaps the Samba wasn’t Chris’s strong suit: ‘I suppose there are few things a tall man with a good body, a handsome face and a sense of humour cannot do.’

Sadly the actor placed fifth on the series (former Australian Rules player Anthony Koutoufides took out that cohort of celebs), however Chris once claimed his appearance on the show nearly put his casting as Thor in jeopardy five years later, as Marvel Studios boss Kevin Feige wondered whether the fans would revolt knowing the hammer-wielding god had a past in the ballroom.

Don’t shed too many tears as, in that ridiculously cliched lane we’re going to walk down, the rest is history.