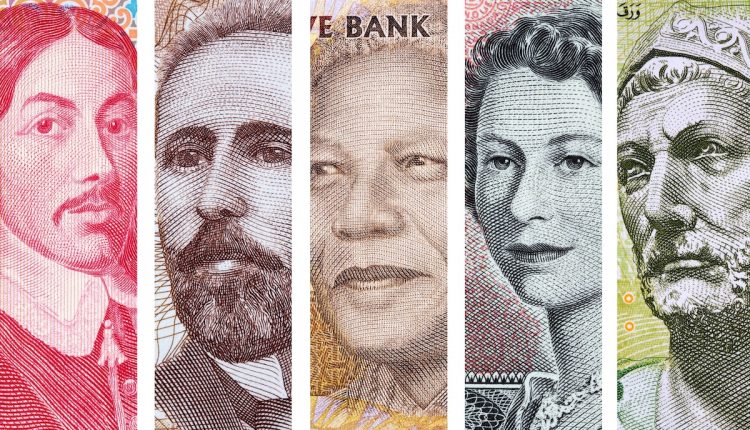 What Can The Faces On Its Currency Tell Us About A Country?

Emblazoned with mottos, emblems, and historical imagery, money is one of the most tangible symbols of a nation’s identity. As that identity evolves, so too does the design of the country’s coins and banknotes—and the process can be fraught.

That has been the case in the United States with a plan to make abolitionist Harriet Tubman the face of the $20 bill, replacing former U.S. President Andrew Jackson. Although the U.S. Treasury had hoped to issue the design in time for the women’s suffrage centennial in 2020, the plan languished under President Donald Trump, who had criticized it as “political correctness.” Now, however, the Biden administration has announced it will move forward with the redesign.

But how do countries determine whose portraits to feature on their currency, and what does it tell us about their pasts? Here’s a look at banknotes from around the world and the stories behind their creation—from the delicate negotiations to create a Bosnian currency in the wake of civil war, to the nations that have used their currency as a way to move on from colonialism and reckon with racist pasts.

In 1866, controversy erupted when the U.S. Treasury issued a five-cent note bearing the portrait of Spencer Clark, the first chief of what is now known as the Bureau of Printing and Engraving. Clark was not well liked by some members of Congress, who had accused him years earlier of fraud and “gross immorality.” (A Congressional committee dismissed the charges.)

Following public outcry, Congress passed a law on April 7, 1866, which prohibited depicting the “portrait or likeness of any living person” on the country’s currency. U.S. law still prohibits using the likeness of living people today, and even commemorative coins honoring a past president cannot be issued until two years after the president’s death.

In the modern era, the country has mainly celebrated past presidents and Founding Fathers on its currency—with portraits of George Washington, Thomas Jefferson, Abraham Lincoln, Alexander Hamilton, Ulysses S. Grant, and Benjamin Franklin gracing its banknotes.

Bosnia and Herzegovina’s banknotes bear the images of the country’s famous writers, but that decision was driven more by conflict avoidance than literary admiration. In 1995, the Dayton Accords brought an end to years of civil war in Bosnia and created a single state with two parts, the Serb Republic and the Croat-Bosniak Federation of Bosnia and Herzegovina.

Similarly, the new nation would have a single currency, the Bosnian convertible mark, but would issue two versions of each denomination to reflect the cultural identity of each side. The banknotes still had to be cohesive, however, and initial submissions were rejected for violating that requirement—including one controversial design featuring Serb hero Gavrilo Princip, famous for setting off World War I by assassinating Austro-Hungarian Archduke Franz Ferdinand.

Debates over banknote design dragged on for so long that the bank had to issue coupons instead when it opened in 1997, according to U.S. economist Warren Coats, who helped establish the bank. Ultimately, the two sides agreed on using portraits of writers—and even found some common ground as both selected novelist Meša Selimović for their five-mark notes. That note has since been discontinued, but in 2002, the country created a new 200-mark note featuring the Nobel Prize-winning writer Ivo Andric.

New Zealand’s banknote design has been “an unintentional litmus test of New Zealand’s evolving self-image” ever since it began issuing currency in 1934, according to historian Matthew Wright. The British dominion’s first banknotes reflected a split identity, bearing both British and local motifs. The earliest series bore a portrait of Māori King Tawhaio, whose image was replaced in 1940 with Captain James Cook, the British explorer who “discovered” New Zealand.

New Zealand became a self-governing nation in 1947—yet in 1967, more than 20 years later, it was still proud of its association with Britain. Queen Elizabeth II displaced Cook on all denominations, alongside indigenous plants and birds.

By the late 20th century, however, New Zealand had begun to think of itself as a diverse and sovereign nation. In 1991, five years after winning full legal independence from Britain, New Zealand removed the Queen from all but its $20 bill and replaced her with prominent New Zealanders—including women’s suffrage leader Kate Shepperd, mountaineer Sir Edmund Hillary, Māori political and cultural leader Sir Apirana Ngata, and Nobel Prize-winning physicist Ernest Rutherford—who still grace the banknotes today.

Like New Zealand, the evolution of South Africa’s banknotes reflects the country’s reckoning with its colonial history. In 1961, it issued its first banknotes after gaining independence from Great Britain. In tribute to its colonial beginnings, however, each bill bore a portrait of Jan van Riebeeck, a Dutch explorer who in 1652 founded the trading station that would become Cape Town

Van Riebeeck remained the face of the nation’s currency for three decades. In 1992, however, as South Africa grappled with dismantling its racist apartheid system, he was finally replaced with its iconic “big five” animals—the rhinoceros, elephant, lion, Cape buffalo, and leopard—that were deemed more representative of (and acceptable to) South Africans.

Twenty years later, South Africa made another big change. In 2012, the country unveiled new banknotes featuring the country’s first Black president and anti-apartheid activist Nelson Mandela. “A country’s currency is a fundamental component of its national identity,” said South African Reserve Bank Governor Gill Marcus, explaining that the new design “reflects South Africa’s pride as a nation.” Mandela remains the face of South African currency—and in 2018 the country even issued a commemorative series of banknotes depicting scenes from Mandela’s life to celebrate the 100th anniversary of his birth.

Mongolia traces its monetary history to the 13th-century rule of Genghis Khan. He transformed the nation from a pastoral economy to a global powerhouse, creating the largest contiguous empire in history. Although Genghis Khan introduced gold and silver coins to the empire, it would be his grandson, Kublai Khan, who would widely implement paper money. (Learn more about the Mongols.)

Mongolia has kept things relatively simple with just two prominent figures on its banknotes: its famous ancient ruler Genghis Khan, and revolutionary hero Damdin Sükhbaatar, who led the Mongolian army to victory over their Chinese occupiers in 1921.

A portrait of Sükhbaatar first graced the country’s banknotes in 1939, commemorating his role in establishing the rule of the communist People’s Republic of Mongolia. The war hero would continue to dominate the currency for more than 50 years, until democracy swept Mongolia in the 1990s. Since 1993, Genghis Khan has been featured on the highest-value bills—from 500 to 20,000 togrogs—while Sükhbaatar still appears on smaller denominations.

The Dominican Republic’s 200-peso note pays homage to three sisters who organized a resistance movement against dictator Rafael Trujillo—and whose murder kicked off a revolution.

After rising to power in 1930, Trujillo ruthlessly ruled over the Dominican Republic. He imprisoned, tortured, or murdered anyone who spoke out against him. In the 1950s, the Mirabal sisters—Patria, Minerva, and María Teresa—became leaders in the resistance movement that sought to end the brutal regime. Trujillo repeatedly arrested and imprisoned them before ultimately ordering their assassination on November 25, 1960.

Trujillo’s regime ended a year later with his assassination, but it would be decades before the government embraced the Mirabel sisters (also known as Las Mariposas, or the butterflies) as national heroes. Although they briefly graced a 25-centavo coin in the 1980s, the Mirabel sisters became the face of the 200-peso note in 2007. The UN has also designated the date of their murder as the International Day for the Elimination of Violence against Women.

Scientists Spot A ‘Space Hurricane’ For The First Time

Shark-like fossil with manta ‘wings’ is unlike anything seen before

Newfound meteorite could help unlock secrets of the solar system

A Black-Footed Ferret Has Been Cloned, A First For A US…