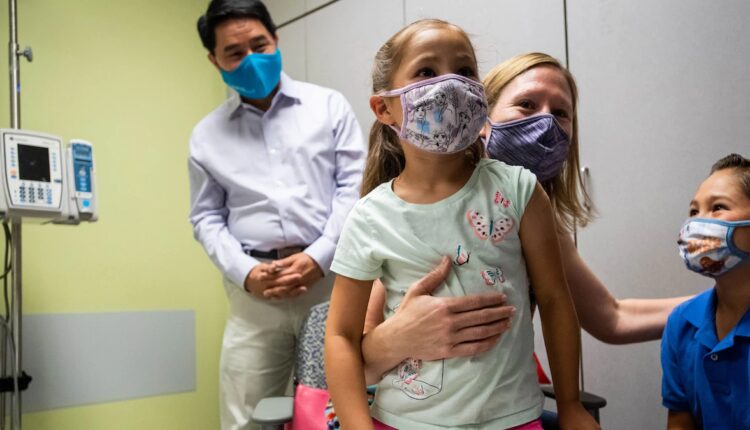 Why kids are still waiting for their COVID-19 vaccines

Millions of parents across the nation are facing a stressful dilemma in the coming weeks: whether to send their children back to school for in-person instruction as the highly transmissible Delta variant surges across the country.

There were 93,824 new cases among U.S. children recorded the week of August 5, according to the American Academy of Pediatrics, a 30 percent increase from the previous week and the highest since February. Hospitalizations are also rising among those under the age of 17.

But even though cases are rising, it’s not clear whether this means that kids are more susceptible to Delta than previous strains. Infections are surging among all those who remain unvaccinated—which includes all children under 12, who are not yet eligible for the vaccine.

Although kids 12 and older became eligible for Pfizer’s vaccine in May, it’s not clear when younger kids will be able to get their shot. Despite initial hopes that the vaccines would be available in early fall, experts now believe that the U.S. Food and Drug Administration is not likely to grant that authorization until late November. (Here’s the latest on COVID-19 vaccines.)

That has led many parents to ask what’s taking so long—and whether it’s possible to speed things up. But Joseph Domachowske, professor of pediatrics at State University of New York (SUNY) Upstate Medical University in Syracuse, points out that for every parent asking why the FDA isn’t moving faster, there are others asking, “Why are you going so fast?”

COVID-19 vaccines have been developed and authorized among adults in record-shattering time. But even as the Delta variant injects new urgency to get jabs in arms, experts say it’s equally critical to ensure the vaccines are safe and have the appropriate dose for kids. Balancing those two objectives is incredibly tricky—and necessary.

The challenges of testing vaccines in kids

“They might respond better or worse,” James Campbell, professor of pediatrics at the University of Maryland School of Medicine’s Center for Vaccine Development and Global Health, told National Geographic earlier this year. “Until you do the study with the vaccine, you don’t know what will happen.”

Typically, however, new drugs and vaccines are tested in healthy adults before launching clinical trials among riskier populations like kids and pregnant women. (Here’s why kids need their own COVID-19 vaccine trials.)

Adolescents are a different story. By September 2020, Pfizer had accumulated enough safety data in its clinical trials to expand them to include teenagers as young as 16. In October, the company expanded its trials to include kids as young as 12.

“[With teenagers] you pretty much were confident that you had the dosing,” says Paul Offit, director of the Vaccine Education Center at the Children’s Hospital of Philadelphia. “So that was easy. It’s not so easy when you go down to five or six years of age.”

Figuring out the right dose to give kids requires additional study. First, researchers test a low dose of the vaccine in an older group—say, kids ages five to 11—to determine its safety. Then they give a higher dose to see if the vaccine remained safe and elicited an immune response comparable to a healthy adult. Then they test it among increasingly younger age groups.

Still, some scientists were disappointed last fall when those trials were slow to materialize. Even though the FDA had granted emergency use authorization to Pfizer and Moderna’s vaccines in December, the companies didn’t launch their clinical trials among kids ages 11 and younger until March.

“It didn’t seem from early on that these trials in kids were happening with the same urgency that they were with adults,” says Sean O’Leary, a professor at the University of Colorado and vice chair of the American Academy of Pediatricians Committee on Infectious Diseases.

Once the trials got underway, however, they moved quickly. Completed within two months, the first phase of Pfizer’s clinical trials demonstrated that the vaccine was safe and effective in a small group of 144 children. In June, Pfizer launched its combined phase two and three clinical trials to assess the efficacy of the vaccines among up to 4,500 children ages six months to 11 years.

“I’ve never seen anything like it,” says Domachowske, who is supervising the Pfizer-BioNTech pediatric trials at SUNY Upstate Medical University. “If we could run clinical trials like this all the time, we would improve public health in an astonishing way.”

At the time, Pfizer said it expected to submit data to the FDA in September for emergency authorization of its vaccine for the oldest group in its trials, kids ages five to 11. Data for the younger age groups were to be expected in the subsequent weeks and months. Moderna, meanwhile, filed for emergency use authorization to use its vaccine among adolescents in June.

Side effects cause delays

But around that same time, reports arose of rare cases of heart inflammation among young adults and teens who had received the mRNA vaccines. Most of these cases were reported among males between the ages of 18 and 24. (Heart problems after vaccinations are very rare—and often resolve quickly.)

At an FDA advisory committee meeting in June, scientists debated how to balance the risk of this new side effect with the decision to authorize the vaccines among younger children. Given that kids are at a lower risk of severe disease, some argued that it would be better to conduct further study. Others argued that the vaccines were needed sooner rather than later.

Ultimately, in late June the FDA added a warning label to the vaccines and updated the consent form that’s used to enroll new clinical trial participants. Domachowske says that although it was just a small adjustment, it stalled his trial for three or four weeks.

Then, in late July, federal regulators asked Pfizer and Moderna to expand their clinical trials to include up to several thousand more children in the 5-to-11-year-old age group and provide four to six months of safety data rather than just two. Sources told the New York Times that this was a precautionary measure to allow researchers to detect rare side effects like heart inflammation. Moderna has said it will expand its trial; a spokesperson for Pfizer says it has not updated its trial at this point.

Not all scientists agree with that approach. On August 5, the American Academy of Pediatrics (AAP) sent a letter to the FDA urging it “to continue working aggressively towards authorizing safe and effective COVID-19 vaccines for children under age 12 as soon as possible” —and to consider authorizing the vaccines for children ages 5 to 11 based on the data from the initial cohort.

Offit says it’s unclear why the FDA requested additional months of safety data given that all safety issues so far have been seen within six weeks of a dose. A few thousand additional participants would also still be far too few to detect an extremely rare side effect. Still, he notes that he’s not privy to the FDA’s data. “Maybe they’re seeing something that worries them,” he says. “Maybe they’re not seeing enough disease in the studies so that they can actually make statements about efficacy. I don’t know.”

Ultimately, Domachowske says, researchers need more time. “We don’t know yet that we’re using the right dose at the right time at the right age,” he says. “We’re getting closer. But rushing this is not a wise decision.”

O’Leary says the request to enroll new participants in the vaccine trials may be frustrating and will certainly cause delays—but it might not necessarily take all that long. Parents who weren’t able to get their kids into the vaccine trials in the spring now have another chance.

But it’s anyone’s guess when authorization may finally come through. Domachowske, whose Pfizer trial is just now collecting data from participants who are one month past their second dose, says he doesn’t expect authorization before Thanksgiving.

“We’re talking about sometime after Labor Day to have all of the data crunched,” he says. Then, he says, Pfizer will need at least a month to put together the request for emergency use authorization and the FDA will need a month or two to review it.

In the meantime, experts say we already have a powerful pathway to protecting kids from the Delta variant: vaccinating more adults.

“If everyone who was eligible to be vaccinated got vaccinated, we wouldn’t be seeing this surge,” O’Leary says. “That’s tragic but it’s not too late. The more people that can be vaccinated right now, the better off our children will be.”

How to take a screenshot on a Chromebook

Who qualifies for a coronavirus booster shot? Why it’s still unclear.