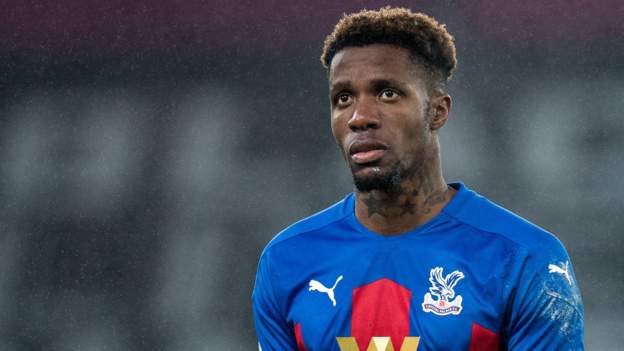 BBC Sport understands the 28-year-old will no longer follow the initiative adopted in the Premier League last season after the rise of the Black Lives Matter movement.

On Thursday Zaha said players “should stand tall”, reiterating his view that taking the knee is “degrading”.

“It’s becoming something that we just do now,” he added.

Zaha continued: “It feels like we are isolating ourselves from these things that are not working anyway.”

Last week, Zaha questioned the purpose of taking a knee before the start of matches while speaking to the On The Judy podcast.external-link

He also said: “Why must I even wear Black Lives Matter on the back of my top to show you that we matter? This is all degrading stuff.”

Speaking at the FT Business of Football summit, he added: “Growing up, my parents let me know I should be proud to be black. We should stand tall.

“With taking a knee, sometimes people forget we have to do it. It is becoming something we just do. That is not enough for me.”

Zaha said he was wary of being used as a mouthpiece for the fight against racism, saying he is asked for interviews in order to “tick a box”.

This week, Championship side Brentford said their players would stop taking a knee before games because they felt the gesture against discrimination no longer had the required impact.

QPR and Middlesbrough are two other sides in the league to have stopped making the gesture.

Zlatan Ibrahimovic: How the AC Milan striker is producing a European renaissance

National League North and South seasons null and void: ‘It’s a bit of a nightmare’