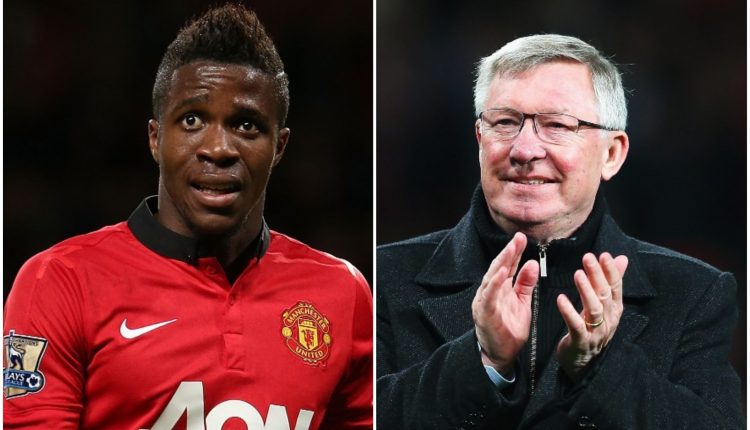 Wilfried Zaha admits he regrets changing his playing style after joining Manchester United and claims he did not express his personality under David Moyes.

And the 28-year-old has revealed how a face-to-face meeting with Ferguson and Sir Bobby Charlton set up his switch to Old Trafford.

‘Things just happened quickly, I ended up going to speak to Sir Alex Ferguson and Sir Bobby Charlton in London,’ Zaha said on The Greatest Game with Jamie Carragher podcast.

‘It was just crazy, it was unreal, I went to some hotel, knocked on some massive door and Sir Alex Ferguson opened the door and Sir Bobby Charlton was sat behind him. It was like, ‘am I actually dreaming?’.

‘Sir Alex Ferguson, who I’ve watched for years, tells me he wants me to be part of his team. It was all just surreal.

‘He only really said he wants me to play for Man United, I’d play out on the wing, there’s other young players there like [Danny] Welbeck and [Tom] Cleverley that I’d get on with, and obviously when you come at first don’t expect to play straight away, you have to earn that position.

‘That’s all he said really, I was fine with it. I was thinking, ‘I’m good with anything, the opportunity is all I need’.’

Zaha, however, did not get to play under Ferguson at United as the Scot announced his retirement at the end of that season.

‘I was gutted really because I was thinking the main reason why I’m even coming here is because Sir Alex Ferguson is one of the best managers in the world. And he’s the reason why I’ve come, it’s a no-brainer with me speaking to him,’ said Zaha.

‘Me coming and seeing him retire, I just didn’t expect it, but it’s like I’ve got to get on with it either way.’

Asked if Ferguson spoke to him after announcing his decision to retire, Zaha replied: ‘No, nothing. I just saw it in the news and I was thinking, ‘this can’t be true, he wanted to sign me, he must want to see me play at least’.

‘Obviously it’s football, you’ve just got to get on with it.

‘When I signed with United I asked to go back on loan to Palace to finish off the season but when the season finished he retired.

‘Even up to now, I think what if I didn’t go back, maybe I would’ve have been able to play with the team.’

Following Moyes’ arrival at United, Zaha was frozen out of the team and had started just one game in the League Cup before joining Cardiff City on loan in January 2014.

Asked if he had any regrets about his time at United, Zaha replied: ‘To be honest, when I usually speak about Man United I wouldn’t say I regret anything but that is one thing I do regret because I didn’t push my personality.

‘Because I’d never moved from Croydon, I’d never went anywhere, all of the sudden I’m in Manchester, I’m feeling homesick at times, I did not put how I play and my personality across at all. I was literally a shadow of myself.

‘I can say maybe it came at the wrong time, I was not mature enough. But at the same time, the way the manager wanted me to play, I wanted him to trust me, so then I kind of lost my identity as well because I stopped doing skills, and then it’s like, ‘who am I if I don’t do skills’. It’s a bit of both really, I’m a bit on the fence with that.

‘When I went to Man United I was very raw, it was a lot about doing skills and stuff, obviously I’m new there so I’m trying to gain the manager’s trust. I think he wanted me to keep the ball a lot more so I stopped taking on players and started just passing backwards. Obviously the manager is going to lose favour because it’s like, ‘what exactly do you do?’.

‘Like I said, I lost myself and I want him to trust in me so much that I’m going to be a player who keeps the ball all the time that I forget I’m that player who has to go forward, take people on and try things.

‘I definitely feel like I should have got more opportunities. I feel like the only way you’re going to learn and grow in confidence is by playing.

‘I don’t really think I got an opportunity at all, I don’t know what the reason was. I never really got the opportunity to play in games at all, and then I just had to go out on loan. Up to now I don’t think I was given a fair chance.

‘It’s difficult to say because I am only the player I am now because of what I’ve gone through but it would definitely be personality. I didn’t get to Man United by winning a raffle ticket. I got there because of what I do and what I’ve done.

‘If I was to go in there now it’s like, ‘this is how I’d play’, that’s exactly how I’d be. And I’d put across to everyone, ‘this is how I play, I’m going to take on players, I may lose the ball but I will get an opportunity and I will score or I will assist someone’. Just showing everyone I am me and they’ve got to accept it. That’s the only thing I regret, not showing me real self.’

Are Your Managers in Sync with Your Change Strategy?