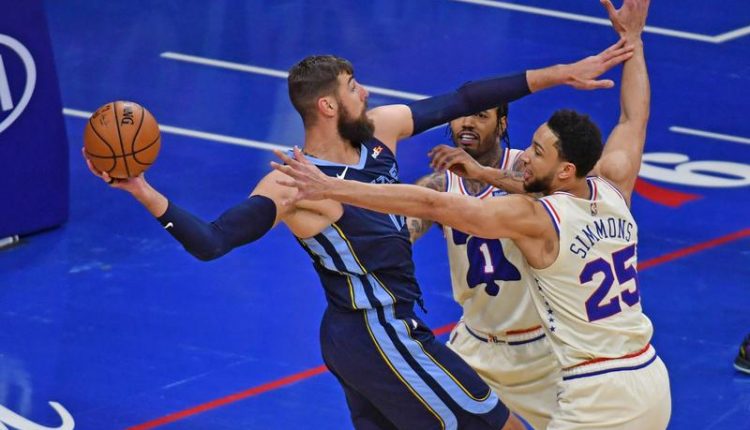 Dillon Brooks recorded 17 points to lead seven players in double-digit scoring as the visiting Memphis Grizzlies breezed to a 116-100 victory over the Philadelphia 76ers on Sunday.

Jonas Valanciunas collected 16 points and 12 rebounds to notch his career-high-tying 10th consecutive double-double for the Grizzlies, who erupted for 45 points in the third quarter. Memphis, which has won three of its past four games overall, completed a season sweep of Philadelphia after posting a 106-104 win over the 76ers on Jan. 16.

Brandon Clarke and Grayson Allen each scored 15 points, De’Anthony Melton and Desmond Bane each had 14 and Kyle Anderson chipped in with 10.

Allen and Melton each drained four 3-pointers for Memphis, which connected on 16 of 38 shots from beyond the arc. That display came two days after the Grizzlies made 19 of 39 from 3-point range in a 120-108 win over the Minnesota Timberwolves.

Tobias Harris scored 21 points, 13 in the first half, and Shake Milton added 14 off the bench for Philadelphia, which played without Joel Embiid. The four-time All-Star center was given the night off after he returned from a 10-game absence due to a bone bruise in his left knee during the 76ers’ 122-113 victory over Minnesota on Saturday.

Anderson drained a 3-pointer and Allen connected from beyond the arc on three occasions during a 65-second span as Memphis scored 14 of the first 18 points of the third quarter to take a 66-46 advantage.

The 76ers made a brief run to trim their deficit to 15 before the Grizzlies kicked it up a notch. Melton, Bane and Tyus Jones each drained a 3-pointer to power Memphis to a 97-71 lead after three quarters.

The sizable advantage allowed the Grizzlies to overcome being outscored 29-19 in the fourth quarter.

Memphis claimed a 29-22 lead after the first quarter and pushed the advantage to 38-25 after Anderson’s floating jumper with 8:43 remaining in the second. Brooks converted a rare four-point play later in the quarter to help the Grizzlies seize a 52-42 lead at intermission.

China is about to try a high-stakes landing on Mars

CDC recommends Pfizer COVID-19 vaccine for kids as young as…