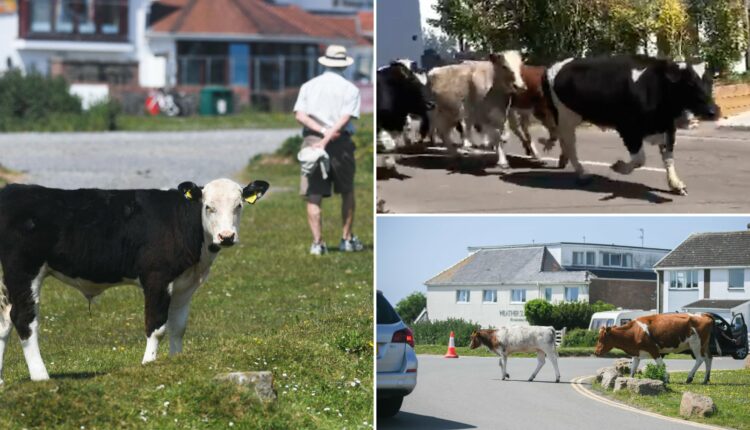 A woman was badly injured when she was attacked by a herd of cows that have free rein in a Welsh village.

The tourist, who is in her 30s, was left with a broken arm on Tuesday when the cow flicked its head and hit her.

People in the village of Southgate on the Gower peninsula, south Wales, have been warned that the cows are becoming more comfortable with humans, particularly throughout the lockdowns.

The woman was airlifted to hospital in Swansea to be treated.

Coffee shop worker Jamie Francis said: ‘We all witnessed it – but we are used to the cows roaming wild around here. They are very heavy creatures.

‘Locals know to avoid them – especially on green bag recycling days when the cows come in for a free meal, ripping open the bags.’

Cyclists often have to swerve the cows on country roads and some have been spotted on golf courses.

Schoolboy Noah Williamson, 12, and brother Sam, 14, had to dodge a herd galloping towards them – with one cow having a plastic chair on its head.

Their mum Stephanie said: ‘Noah was with his older brother Sam and I’m just glad they had the sense to stay out of the way in someone’s drive to avoid the stampede.

‘The cow with the chair on its head has given us all a good giggle though, and the cow has since had the chair removed, so it is fine and there’s no harm done.’

Farmer Angharad Williams, who owns the cows, said: ‘We had calls from people that they had stampeded their way back through Southgate and towards the fields – they know their way home. The cow was fine. He pulled it off himself.’

However, some villagers believe letting the animals roam free is dangerous.

Worried dad David Jones said: ‘Despite a number of attacks on people and dogs, Swansea Council refuses to acknowledge there is a health and safety risk.

‘They allow hundreds of cows and young calves to roam the streets in Pennard and Southgate.

‘The local primary school encourages children to walk and cycle to school. Is it going to take the death of a child before the council does anything about this danger?

‘It is getting worse, with the numbers increasing, and I have spoken to a lot of neighbours have had cows breaking into their gardens and damaging cars – one person was attacked.

‘They are also causing damage to people’s cars. I feared my little boy would be trampled on after cows made a beeline for his dog as they went on a walk.’

Swansea Council said: ‘As with all areas of Gower where common land exists, we would urge residents to be mindful they live in an environment where a variety of animals can occasionally wander from grassed areas onto roads and into residential areas.

‘We work closely with the Gower Commons Association and local farmers to ensure this is kept under control.’