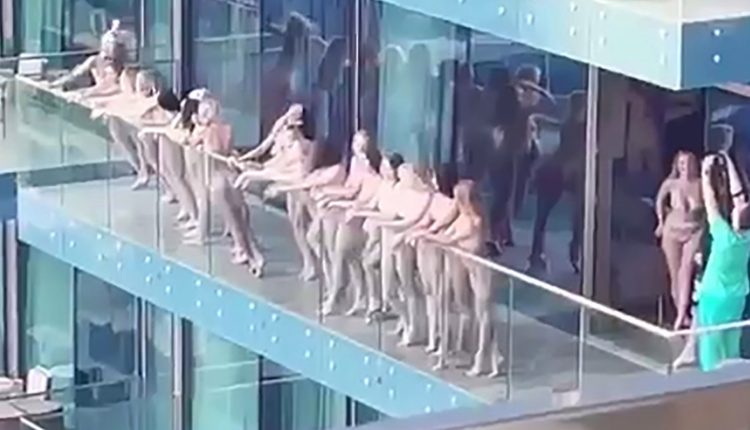 Women arrested in Dubai after stripping naked to pose on balcony

Dubai police have arrested a group of people over a video showing women stripped naked and posing on a balcony in broad daylight.

Those involved have been arrested for public debauchery – a law punishable with up to six months in prison and a fine of 5,000 dirhams (at least £980).

The video and pictures surfaced on social media on Saturday night, showing more than a dozen women lined up on a high-rise glass balcony in the city’s flashy Marina neighbourhood.

A man can be seen snapping the women’s pictures as a person films the scene from a balcony next door.

State-linked newspaper The National reported that the move appeared to be a ‘publicity stunt’ but did not elaborate further on this suggestion.

Dubai police said those arrested over the ‘indecent’ video had been referred to the public prosecutor.

A police statement read: ‘Such unacceptable behaviours do not reflect the values and ethics of Emirati society.’

Breaches of the United Arab Emirates’s public decency law include nudity and ‘other lewd behaviour’.

Sharing pornographic material is also punishable with prison time and hefty fines under the country’s laws, which are based on Islamic law, or Shariah.

The footage came as a shock to police in the UAE, where acts like kissing in public or drinking alcohol without a license have put people behind bars.

Others have been jailed for their comments and videos shared online due to the country’s strict laws governing expression.

Acer debuts the hugest Chromebook ever