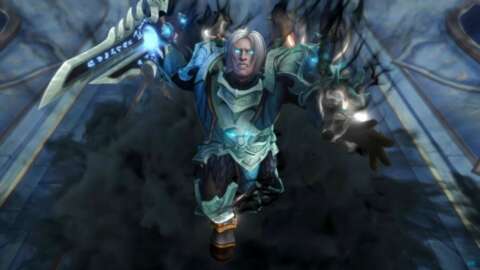 After seven long months, World of Warcraft: Shadowlands is finally getting its first major content release with the arrival of patch 9.1, Chains of Domination, on June 29.

The update, which was previewed at BlizzConline earlier this year, includes a new raid, the Sanctum of Domination, which will see players going toe-to-toe with Sylvanas Windrunner, who is currently serving as the right-hand-woman of the expansion’s new big-bad, the Jailer. Players will also have a run-in with Kel’Thuzad, one of the Lich King’s most faithful servants.

As seen in a story trailer for the content update, Sylvanas has corrupted Anduin, leader of the Alliance, turning him into what essentially looks like Arthas 2.0. That should have some huge story implications moving forward. Sanctum of Domination’s normal and heroic difficulties will go live July 5, one week after patch 9.1 releases. The first wing of the Raid Finder difficulty for Sanctum of Domination will go live July 13.

In addition to the new raid, players will also be able to explore a new zone–Korthia, the City of Secrets– as well as a new 8-boss “mega” dungeon, Tazavesh, the Veiled Market.

Players will also be able to continue the story of their covenant campaigns, with each covenant gaining new story chapters to progress through as well as 40 new renown ranks to earn. Flying will become available in the Shadowlands to those players who have completed the necessary requirements, and new content and tweaks will be coming to the rogue-like inspired Torghast dungeon as well. Patch 9.1 will also start the beginning of a new Arena PvP season.

Patch 9.1 arrives almost a month after the arrival of Burning Crusade Classic, a rerelease of WoW’s first expansion that saw the game’s most dedicated players power-leveling to the expansion’s new level-cap in a mere 13 hours.