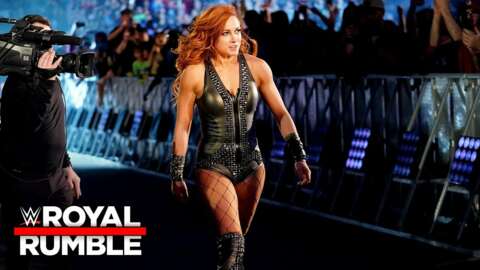 Former Raw and Smackdown Women’s Champion Becky Lynch teased her return at Sunday’s Royal Rumble event, but it was not to be. WWE fans haven’t seen Lynch since last May when she announced her pregnancy on Raw and relinquished her championship to the Money in the Bank winner, Asuka.

During the women’s Rumble event, Lynch tweeted out an interesting image of a curtain primarily used in the Gorilla position. Even WWE responded back in a curious nature as if she would be the latest in the surprise entrants.

For a few minutes, wrestling Twitter went wild thinking she was going to make an appearance in the Rumble match, as she tweeted this out right before the 25th entrant–which was Tamina. However, as the match went on, it was pretty clear she was just messing with everyone, and Lynch later tweeted again about her photography skills.

Since Lynch, real name Rebecca Quinn has been gone, she and husband Seth Rollins had their first child–which happened back in December. She’s made no hint or given any sort of idea when she would return, but in the meantime, fans will wait patiently til the Man comes around again.

Royal Rumble 2021: The Biggest Surprises From The WWE PPV